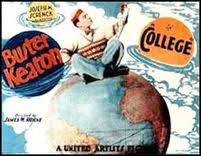 College is by far the weakest of Buster Keaton’s independent features, and for far too many reasons. After seeing his pet project The General get critically and financially pummeled, Keaton caved on all counts with his next movie.

The first strike against College is that Keaton allowed others to handle the writing and directing. Strangely enough, some of those personnel, such as director James Horne and writer Carl Harbaugh, later became associated with Laurel & Hardy’s best features. (L&H nemesis Charlie Hall can also be seen briefly, as the coxswain of the college rowing team.) For College, that unfortunately results in Buster’s usual industrious persona being turned into a Stan Laurel-like simpleton, seemingly incapable of handling menial tasks.

Then there’s the movie’s titular subject. Keaton plays Ronald, a high-school bookworm who embarrasses his girlfriend Mary (Anne Cornwall) by giving a valedictorian address on “the curse of athletics.” Mary goes off to college with her more athletic fellow graduate Jeff, informing Ronald that she will have nothing more to do with him until he gets more athletic. Predictably, Ronald follows Mary to college and fouls up in every collegiate sport at which he competes.

The second strike against the movie is – never mind the curse of athletics – the curse of movie comedians who never made it through high school trying to conjure up a credible comedy about college life. The Marx Brothers and Laurel & Hardy also fell victim to this malady, resulting in some of their most middling movies.

Strike Three is that the movie’s premise just doesn’t ring true for Keaton. Having seen his physical agility clearly demonstrated in all of his other movies, it’s downright painful to watch him getting outrun by two little kids on a track field, or proving himself completely ignorant in even the basics of sports. It doesn’t help matters to continually cut away from Keaton to shots of other college athletes guffawing over Ronald’s ineptitude; if everyone in the movie thinks he’s a zero, why should the viewer sympathize with him? The moment Mary tries to blow off Ronald at the high-school graduation, we’re meant to root for Ronald making the grade in college sports, but you’re more likely thinking that if all Mary wants is a dumb jock, she’s getting what she deserves.

The movie is far more “gaggy” than Keaton’s previous features, which means that instead of having a stake in Buster/Ronald’s outcome, we’re left to judge the movie on the basis of its individual gags, most of which are quite predictable. 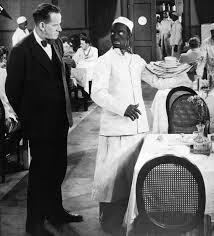 The absolute nadir of the movie, and perhaps of Keaton’s independent movies, is a blackface scene in which Ronald, desperate for as job on campus, impersonates a “colored waiter.” This demonstrates the movie’s absolute dearth of characterization; even if the scene was funnier to segregated 1920’s audiences than it is now, it’s the kind of “comedy” that any nondescript comedian could do. And needless to say, it almost makes the racial stereotypes of Keaton’s Seven Chances look downright benign.

(Even Snitz Edwards, who provided funny support in Seven Chances and Battling Butler, has little comic material here, save one brief moment where he hilariously recalls a lost love and cries over her photograph.)

The movie’s climax shows Ronald, laboring to save Mary from the brutish athlete who has locked her in her room, suddenly has the impetus to succeed at every athletic task he had previously bollixed up. This scene, too, is lacking for a couple of reasons. Keaton, resigned to trying to do a more crowd-pleasing movie than The General, could not give himself to train for months for the shot in which Ronald pole-vaults into Mary’s room to save her. Instead, he hired Lee Barnes, an Olympic pole-vaulting champion, to double for him in long-shot. It was the only time that Keaton caved to fakery in a movie stunt; previously, it had been a matter of pride for him to do his stunts “on the level.” This alone shows how dispirited Keaton was by The General‘s failure.

Then when Ronald reaches Mary’s room, he throws objects at Mary’s bully in a fit of rage. This is obviously an attempt to reprise the dramatic climax of Battling Butler, but even in that mid-level comedy, Keaton’s milquetoast character gave us more to root for, thus the dramatic conflict was more satisfying. Here, it seems to happen in a void.

Weirdest of all is the Cops-like black-comedy ending, where Ronald and Mary go from marriage to parenthood to squabbling to separate graves in eleven seconds. Why did Keaton, who copped out at every other level of the movie, suddenly decide that such a “personal” touch was necessary for the fade-out? One imagines that it left 1927 audiences scratching their heads.

The movie’s most bittersweet touch was to have the rowboat for Ronald’s rowing team bear the name of Damfino, lifted from Keaton’s short The Boat – a movie that would be a far worthier investment of your time than College.