Buster Keaton rated Battling Butler as one of his favorite movies, and though it isn’t one of his greatest, it’s easy to see why Keaton thought so highly of it. Though much of the movie’s “gaggery” comes close to situation-comedy, the movie finishes with a genuinely emotional fight climax that’s every bit as involving as the boxing match in Rocky.

As with Seven Chances, Keaton had to make the best of a stage-show adaptation that had been foisted upon him by Joe Schenck. In this case, the play was a musical comedy about a pampered rich man, Alfred Butler (played in the movie, of course, by Keaton), who happens to have the same name as a championship boxer. When rich-man Butler is forced to impersonate the boxer in order to impress his wife (who married him under the mistaken impression that he was the boxer), he fears for his life when he is forced to compete against a fighter with the charming moniker of “The Alabama Murderer.”

[From here on, for brevity’s sake, I’ll refer to Keaton’s Butler as “Buster.”]

The movie’s biggest debit is that much of its comedy derives from the kind of mix-ups associated with farce, the very genre that Keaton so abhorred. To cite just two examples, the real Butler gets quickly exasperated when he mistakenly assumes that Buster is trying to make time with his wife – yet Butler follows Buster around for seemingly half the movie before he decides to make an issue of it. And when Buster/Butler signs a hotel register, wouldn’t you think he’d notice that the same-named Butler signed in directly above him? 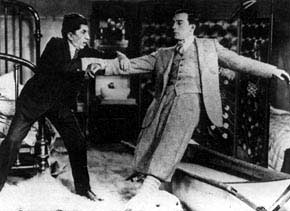 Also, though Keaton has played milquetoasts before, never had he played such a brazen coward. Granted, most regular Joes would be as terrified of fighting in a boxing match as Buster is. Still, after you’ve seen Buster fearfully jump into the referee’s arms two or three times, you tend to lose a little sympathy for him.

The one area where Keaton came up with something unique and stunning is the movie’s ending. In the original play, rich-man Butler is saved from having to box, but Keaton felt he’d be cheating his audience if he didn’t fight after an hour of build-up for it. And Keaton delivers in spades. After an hour of farce, the climax – with the cold-blooded Butler pounding Buster, only to have Buster rise in fury and counter-punch him – is completely dramatic and thoroughly believable. (Director Martin Scorsese has acknowledged the climax as an inspiration for the boxing scenes in his 1980 movie Raging Bull.) Keaton proved to be few comics’ equal in terms of gag construction and gasp-inducing stunts; this climax proved him to be a superb dramatic actor as well.

The supporting actors are nothing to belittle, either. Snitz Edwards (shown above with Buster), Keaton’s wonderful sidekick in Seven Chances, again proves to be a great second-banana as Martin, Buster’s sympathetic valet. Mary O’Brien proves one of the more charming and intelligent Keaton heroines. Best of all is Eddie Borden as the boxing manager. Indeed, the movie’s funniest scene is probably when the manager spies on the preliminary match and pantomimes the loser’s injuries to Buster in gruesome detail.

Keaton’s happy memories of the movie were bolstered by the fact that Battling Butler was Keaton’s most financially successful feature. In retrospect, the laugh factor is so-so on the Keaton scale; it’s the sincerely emotional ending that makes the movie work.