The following is my entry in the blogathon Hot and Bothered: The Films of 1932, being co-hosted on July 9-10, 2016 by Theresa and Aurora at their respective blogs CineMaven’s Essays from the Couch and Once Upon a Screen. Click on the above banner, and read bloggers’ critiques of films released in 1932, just before instigation of Hollywood’s notorious Production Code!

The Dentist is best remembered for two reasons:

(1) It was the first of four short-subject collaborations between W.C. Fields and the movie’s producer, Hollywood’s former “King of Comedy,” Mack Sennett.

(2) Fields was quite misanthropic in all of his movies, but this is one of the few where he has just about no redeeming qualities. Even Fields himself, after viewing the finished product, resolved to tone down his character’s nastiness in future productions.

The movie wastes no time in showing off its pre-Code origins. Fields (whose character is unnamed throughout the movie, other than “Dentist”) is at his breakfast table, reading the morning newspaper. He reads about a local woman he knows who has had a baby and decides he must tell his daughter about it.

Fields walks to the kitchen, sees his daughter (‘Babe’ Kane, whose character is also unnamed) bent over at the open refrigerator, and slaps her on her behind to get her attention. As if that wasn’t enough, the daughter, thinking that the slapper is her fiancee the iceman, nonchalantly demands, “Fifty pounds, and chop it fine!”

Unhappily for Fields, this is the first he’s heard of his daughter’s impending marriage, which he has no intention of allowing. “No more ice in here,” Fields says. “I’m going to buy a Frigidaire!”

Fields calls to his nurse (His dentist’s office is in the room next door!) to find out when his first appointment of the day is. She says it is at 10:30, which gives Fields just enough time to play a cantankerous round of golf. (The golf scenes were filmed at Toluca Lake, CA’s Lakeside Country Club, one of Fields’ favorite courses in real life.) During the course of Fields’ golf game, he knocks out a fellow golfer with one of his shots and then, in a later fit of anger, throws his entire set of clubs and his caddy into a nearby pond.

As Fields is seeing his first patient of the day, a woman (Dorothy Granger) comes in screaming from the throbbing pain in her mouth. While Fields is bragging to the patient about his previous antics on the golf course, the nurse indicates the screaming patient, to which Fields replies, “Oh, the hell with her!”

The first patient eventually leaves, and when the woman comes in, Fields indicates the patient chair and says, “Put it in there, please.” The woman extends one of her long legs and asks Fields, “You won’t hurt my leg, will you? My doctor says I have a very bad leg.” Fields responds, “Your doctor is off his nut. I don’t believe in doctors anyway. There’s a doctor who lives right down the street. Treated a fella for nine years for yellow jaundice, then found out he was a Jap.” 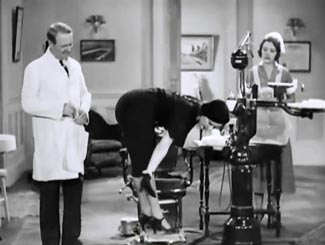 The woman stands up and says, “You know, a little dog bit me the other day.” She bends over to point at her ankle and says, “He bit me right here! It was a little Daschund.” Fields is unconcerned about the bite, as the woman’s behind is now practically in his face. Fields tells her, “You’re rather fortunate it wasn’t a Newfoundland dog that bit you.”

The woman sits back down, and Fields asks, “Shall I use gas?” The woman replies, “Well, gas or electric lights — I feel nervous to have you fool around me in the dark.” Fields tries several times to insert a needle into the woman’s mouth, but she screams so loudly before he even gets that needle in that she scares off another patient who was in the waiting room. Finally, she rushes out in fright.

A very tall patient (Elise Cavanna) enters the room, and Fields twice commands his nurse, “Tell her I’m out!” while the woman is standing there. The nurse turns Fields around, and he politely (and hypocritically) tells the woman, “We’ve been waiting for you.” The woman sits in the patient chair, and Fields tells his nurse — quietly, but not so quietly that the woman can’t hear him — “When I tell you to go out and tell one of these palookas that I’m out, go out and tell ‘em I’m out! Don’t have these buzzards walk in on me…”

The nurse indicates that the woman can hear him, so Fields drops his voice to a whisper and continues his tirade. The nurse again indicates that the woman can still hear him, so Fields kicks the pedal on the patient chair out of spite. The woman is rightly annoyed and gets up to leave, but Fields stops her and asks, “Did you just come in for the ride?” The woman grudgingly sits back down.

Fields examines the woman’s mouth and demonstrates more of his charming professional demeanor by requesting of his nurse, “Hand me that four-hundred-and-four circular buzzsaw, will you?” As Fields begins work on his patient, his daughter comes in, dressed to the nines, and announces that since he wouldn’t let the iceman come into the house, she is going to see the iceman. Fields responds by marching his daughter up to her room and locking her in it. The daughter angrily and continually stamps her feet on the floor, making plaster rain down on Fields’ exam room and into the mouth of his patient.

Fields gets his daughter quieted down and then returns to the patient. There follows one of the most infamous scenes of Fields’ movie career. Fields asks, “Have you ever had this tooth pulled before?”, implying that if the patient is a “tooth virgin” now, she won’t be after he’s finished.

Fields works on the extraction so vigorously and relentlessly that eventually, the patient is pulled up out of the chair and has her long arms and legs wrapped thoroughly around Fields. The sexual/comedic symbolism of this scene was not lost on TV censors, who cut it to ribbons for decades of television broadcasts.

After the woman collapses back in the chair, Fields says he’s going to give her gas, but the daughter resumes her plaster-dropping routine. Fields rushes upstairs to give his daughter tough love, which in his view involves lightly tapping on the door and muttering, “Stop it! Cease!” When Fields returns, the woman has inexplicably left the office. Guess she just wanted a one-dentist stand.

A patient (Billy Bletcher) with an incredibly full beard enters the office. The man’s beard is so full that Fields can’t find the man’s mouth until he uses a stethoscope and has the man say “Ah” over and over. At one point, a bird even flies out of the beard.

The nurse discovers that Fields’ daughter is trying to run away with the iceman and informs Fields of this. Just as Fields tries to stop them, the son of the man whom Fields knocked out on the golf course comes up to Fields and hits him in the jaw. The iceman defends Fields’ honor by knocking the man out cold. Fields’ daughter looks adoringly at her fiancee and says, “Father, you’re not really going to buy a Frigidaire, are you?” Fields grudgingly tells the man who just helped him, “Fifty pounds, and make it snappy!” and goes back to work.

The Dentist is quite funny but more often simply eye-popping in its flaunting of movie convention and taste. For that alone, it makes interesting viewing, for students of both pre-Code and W.C. Fields movies.