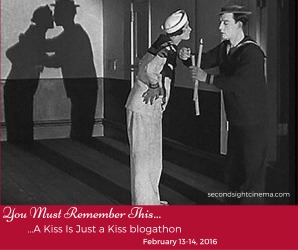 The following is my entry in the You Must Remember This…A Kiss Is Just a Kiss Blogathon, being hosted Feb. 13-14, 2016 by Lesley at the blog Second Sight Cinema. Click on the above banner, and read bloggers’ ruminations on a variety of kisses that occurred in movies from the dawn of cinema through 1980!

It’s shameless, that’s what it is.

The set-up: We’ve spent the movie’s first few minutes learning about Tom and Geraldine “Gerry” Jeffers (Joel McCrea and Claudette Colbert). Tom is a failed inventor. Gerry has been perfectly willing to use her feminine wiles to help Tom on the road to success, but Tom wants to make it on his own merits, which is mostly why he’s a failed inventor. 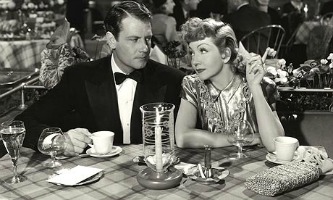 Tom and Gerry have just returned to their New York penthouse after a joyless dinner in which they’ve pondered ending their marriage of five years. Both of them have been imbibing in order to ease the pain, Gerry having imbibed slightly more than Tom. 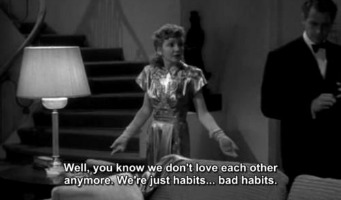 (“And when love’s gone,” Gerry adds, “there’s nothing left but admiration and respect.” What a terrible thing to have as the only pillar left in your marriage!)

Gerry tries to unzip the back of her dress, but she is in no state to do so. Tom says that if she’ll come around into the light, he’ll help her. Strangely enough, a major portion of that light appears to have fallen into Tom’s lap, since that is where Gerry lands. “You don’t think this is a little intimate, do you?” Tom quietly snarks. “Doesn’t mean anything to you anymore to sit on my lap?” 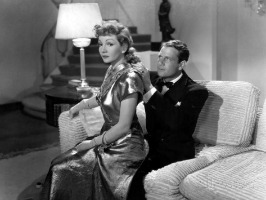 Tom now has Gerry’s back as a target. It’s too tempting. “Or if I kiss you there? Or here? Or here?” says Tom, planting his lips on a number of biological locations familiar to Gerry. One kiss too many, and Gerry complains, “You know I’m ticklish!”

“Then why is your breath coming faster?”

“Because you’re squeezing me!”

You got that right, sister. One last squeeze, and Tom and Gerry end up in an embrace that literally curls Gerry’s toes and sends Victor Young’s musical score into stringy ecstasy.

With her last ounce of coherency, Gerry agrees, as Tom delivers her up the stairs with the same manful intentions that Rhett Butler had for Scarlett O’Hara in Gone with the Wind. “Nothing but a bad habit,” Gerry murmurs, and as Gerry keeps coming up with new synonyms for “bad,” the scene quietly fades.

I couldn’t tell you if this scene was the inspiration or template for movie love scenes to come, but if it wasn’t, it should have been. Absolutely shameless — and would that countless other love scenes had been as flawlessly shameless as this one is.

(When it comes to The Palm Beach Story, I am a self-designated cheerleader for this gift from the movie gods. Click here to read my complete review of this beautiful movie.)