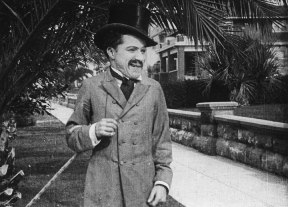 Hindsight, of course, has its rewards. Nevertheless, cinemaphiles can be grateful that Charles Chaplin took Kid Auto Races at Venice as his template from which to build, rather than his first film, Making a Living.

For one thing, while Chaplin’s Tramp character is iconic and instantly identifiable (in more than one sense), the dandy Chaplin plays in Making a Living is just this side of androgynous. In his fey carriage and not-quite-Trampy body language, Chaplin here looks like a 70-years-removed version of future rock star Prince.

Furthermore, the main storyline – Chaplin finagles a job as a newspaper reporter – doesn’t even raise its head until about one-third of the way through the movie (and this is only a one-reeler). It starts off with Chaplin first hustling a dollar from a man on the street (Henry Lehrman, who also directed the movie). Then Chaplin hits (rather crudely) upon a woman who, shortly after, turns out to be Lehrman’s girl.

This results in a brawl between the two men, whose moves mostly consist of Lehrman grinding his hand into Chaplin’s face (Lehrman must have thought this was a real laugh-getter; that’s about all he does to Chaplin in Kid Auto Races), and Chaplin trying to best Lehrman by wrapping his legs around him in a move just short of homoerotic. (If that sounds too explicit, watch the movie and see if you don’t agree.)

Then Chaplin sees a sign for “Local Reporter Wanted” and tries to get the job before getting kicked out of the office – where, conveniently, Lehrman is already employed as a reporter. Lehrman happens upon a car wreck and immediately takes pictures and interviews the driver. Chaplin happens upon the whole thing second-hand, grabs Lehrman’s camera and notes, rushes back to the newspaper office, and gets a job on the basis of this “scoop.” Lehrman tries to stop Chaplin but fails, the two tangle up again (this time next to a streetcar – named Desire, perhaps?), and the movie fades out before we can read anything else Freudian into it.

There are a couple of all-too-brief moments that hint at the greatness that is to come: a bit where Chaplin backs away from someone he has outraged and then does his “harmless little me” coy face; another bit where he continually slaps the knee of the editor for emphasis and, when the editor moves his knee away, moves the knee back into position so he can slap it again. The rest of Chaplin’s work here relies on the same frenetic pacing of every other Sennett/Keystone comedy.

In a pseudo-epigram much quoted since, the publication Moving Picture World described Chaplin as “a comedian of the first water” based on his debut movie performance. But it would be his second movie where Chaplin would truly end up getting his feet wet.