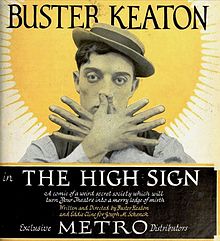 The High Sign was intended as Buster Keaton’s first solo film release, but Keaton temporarily shelved it because he didn’t think it was funny enough. (It was eventually released when Keaton was incapacitated with a broken ankle the following year.)

It’s not Keaton’s worst short by a long shot, but it does have some of the cartoonishness that Buster would eventually eschew for more plausible gags. (Example: Buster paints a hook on the wall and hangs his hat on it.)

Another problem is the movie’s sense of doing whatever gag is handy at the moment, at the expense of plot development. The story is that Buster gets a job at a carnival’s shooting gallery run by a gang of thugs who want to kill a local businessman whom they’ve previously blackmailed. Both the gang and the businessman, having seen Buster’s trick shooting in separate outings, want to hire him – the gang, so that he can help kill the businessman; the businessman, to use him for protection against the gang.

It’s a nice set-up for comedy, but when the gang goes off to kill the businessman, for no good reason Buster goes off to man the shooting gallery for a while, and the gang doesn’t even notice. Then at the gallery, Buster is robbed of the gallery’s daily earnings, and without batting an eye, Buster goes from being robbed to serving another customer. He didn’t want to maybe stop and call the police? This is the kind of arbitrary plotting that seemed more typical of Keaton’s mentor Roscoe Arbuckle than of the intricately plotting Keaton.

Happily, the plot proper finally resumes, and it leads to a superb ending, with Buster springing through trap doors and windows in the businessman’s house in order to thwart the menacing gang. It’s a flawless wrap-up to an otherwise middling short.