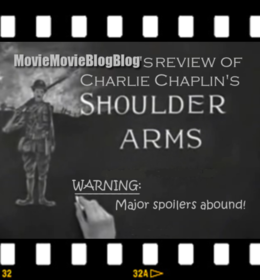 When Charlie Chaplin was making Shoulder Arms, many worried that the movie would come under fire (so to speak) for kidding the World War (blessed be the ignorance that there was a second World War to come). As it happened, the movie was released on Oct. 20, 1918, a month before the Germans signed the Armistice and ended the war, so by that point America could afford to laugh at it. 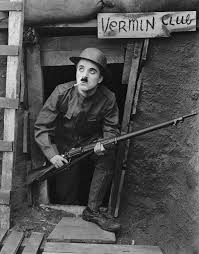 And yet, just as with Chaplin’s World War “companion piece” The Great Dictator, there’s an awful lot of melancholy amidst the comedy. Critics have often complained about Chaplin-the-producer’s cheapness, but there’s no denying that the trenches in which Charlie and his fellow soldiers operate are so authentically dank and claustrophic, you can just about smell them. And they provide some memorable bits, as when the soldiers do their best to sleep in flooded quarters, or when Charlie, bereft of mail from home, reads a letter over a fellow soldier’s shoulder and reacts in empathy with him.

Ironically, the sunniest-looking parts of the movie involve the German soldiers’ activities; occupied France looks uncannily like palm-treed California. But perhaps that fits, since this section of the movie is mostly wish-fulfillment anyway, as Charlie and his peers collect no less than the Kaiser in their endeavors.

And for a moviemaker who used intertitles tersely, Shoulder Arms provides some of Chaplin’s funniest. When Charlie is asked to explain how he captured 13 German soldiers single-handedly, he replies via title, “I surrounded them!” When one of the Kaiser’s men is briefly enjoying some alcohol, the Kaiser admonishes him, “Pay attention to the war!” 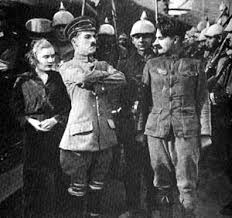 It all ends in an undeniably jingoistic but rousing climax (that shot of Charlie literally kicking the Kaiser’s behind must have sent cheers through theaters in 1918), before we find that – wait for it – Charlie is still sleeping in boot camp and it has all been a dream. (I’d love for some silent-film historian to document how many times the old “It was only a dream” cop-out was employed as a climax; Chaplin and Keaton alone seem to have cornered the market on it.) 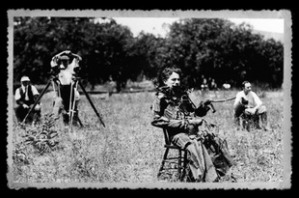 A nice shot of Chaplin directing the movie while in costume. Note the pointing branch.

The nicest part of Shoulder Arms is its self-reflexiveness; the movie’s somber setting seems to have freed Chaplin from the gotta-keep-‘em-laughing, frantic pacing of his earlier work. It’s obviously paving the way for bigger and more thoughtful things to come.