This weekend, New York’s Museum of the Moving Image pays tribute to animation raconteur Charles Martin Jones (1912-2002) with the opening of their exhibit “What’s Up, Doc? The Animation Art of Chuck Jones.”

Like a lot of cartoon buffs, I latched onto Jones’ hilarious animated work early on in life, on Saturday mornings, before I even realized how important it was to read movie credits. Later on, I realized that most of the Looney Tunes cartoons I most enjoyed were the ones that sported the credit “Directed by Chuck Jones.”

One of the highlights of my life was during a year-long period when I lived in Los Angeles, and I managed to finagle a telephone interview with Chuck Jones for a small monthly publication. Years later, the interview was immortalized in print, in the book Chuck Jones: Conversations. As nice as it is to have my name in a printed book, I’m still more excited to have interviewed one of my life-long heroes.

How can someone single out Jones’ finest cartoon ever? Too many to choose from! So I’ve copped out and written a review of Jones’ compilation film, The Bugs Bunny/Road Runner Movie. 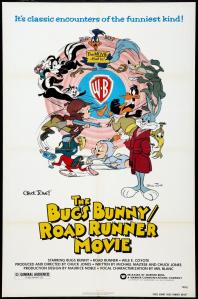 Most of the Warner Bros. compilation cartoon features are iffy at best, taking six-minute shorts and trying to pad them to a feature-length storyline. The Bugs Bunny/Road Runner Movie, the first of these efforts, at least presents most of its cartoons in complete form. It also helps that it exclusively features the work of Chuck Jones, arguably the greatest of the Warner Bros. cartoon directors.

For anyone unlucky enough to be unfamiliar with his work, Chuck Jones created the characters The Road Runner, Wile E. Coyote, and the amorous skunk Pepe Le Pew. He also took the characters of Bugs Bunny and Daffy Duck to their zeniths in cartoons such as What’s Opera, Doc? (1957, with Bugs and Elmer’s chase taking place in a Wagnerian opera) and Duck Amuck (1953, with Daffy being tortured by an unseen animator). Both cartoons, and many other delightful gems, are featured here, and it’s enough to make you a Jones convert on the spot. 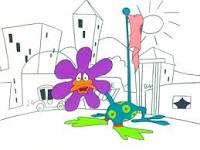 The fast-forward button will be most handy at the movie’s beginning, when Bugs gives us an unctuous lecture on the history of movie chases. The music of Dean Elliot, a Jones veteran, is mostly nondescript and particularly painful in this feature; after the glorious heights of Carl Stalling’s and Milt Franklyn’s music in the classic shorts, Elliott’s work pales even more in comparison. But when the original cartoons begin, you know you’re in the hands of a comedy master.

If you’ve ever wanted some of Warner Bros.’ best cartoon work on a single DVD, this is as good as it gets.