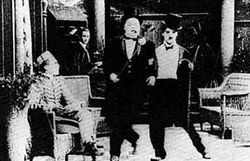 Film history tells us that because of his assertive ways, Chaplin bumped heads with a lot of veterans during his first months at the Keystone Studios. It would appear that Roscoe Arbuckle was not one of them. Here and elsewhere, he and Chaplin are a delight together.

Here, they play drunks coming in separately from a night on the town. As it happens, they have rooms across the hall from each other, and both have wives waiting to nag them about their drinking. When the nagging gets out of hand, soon the wives are fighting each other instead of the husbands, while the husbands discover they go to the same lodge and find that as good as an excuse as any to continue their nightly binge together.

After seeing how well Chaplin and Arbuckle work together here, it’s a pity that Keystone’s keystone, Mack Sennett, didn’t try to pair them again. The movie’s only debit: It’s a one-reeler. Just when it starts to get really interesting, it ends.