I’m ashamed to say that I’ve never seen The Day of the Jackal, the highly acclaimed 1973 thriller that was the inspiration for the movie The Jackal. Having said that, it’s still quite easy to see where the updated version falls short.

The original movie was about an international assassin who methodically plans to kill France’s General DeGaulle. Starting with that scenario, let’s outline how the newer movie has been thoroughly Hollywoodized.

First, the new version drags in the Cold War Russians–who, as movie cliches go, are now on a par with the Nazis. Some sort of Russian baddie (a drug dealer, I guess)–it’s not made very clear) is killed due to the efforts of Preston (Sidney Poitier), the FBI’s deputy director. The baddie’s brother enlists the aid of The Jackal to avenge his death by killing an American public figure.

In the hopes of building suspense, it’s left vague as to who is to be killed. To help uncover The Jackal’s planned target, Preston enlists the aid of Declan Mulqueen, an imprisoned Irish terrorist who used to work with The Jackal. Unfortunately, this tower of teror is played by Richard Gere with a slatternly Irish accent (he sounds like John Lennon with a head cold), and he ends up coming across as the friendliest terrorist you’ll ever meet. 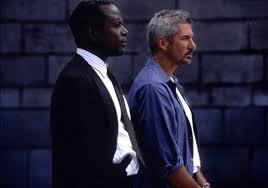 To round out the miscasting, The Jackal, a feared assassin and a master of disguise, is played by…Bruce Willis?? Every time The Jackal changes his hair color or grows a mustache, it’s supposed to throw the FBI wildly off-track. But as usual, Willis wears the same smug sneer throughout the movie, so it doesn’t seem that he’d be hard to recognize. Consequently, Willis’s attempt to change his personas come off like a misguided episode of his old TV series “Moonlighting.”

Nothing in the movie makes much sense. At one point, Preston uncovers Mulqueen having a one-night stand with one of his female agents, and Preston doesn’t bat an eye. We’re given to understand that Mulqueen might jump ship to return to his native Ireland, but the movie doesn’t want to turn the audience against Gere, so this potential plot point turns out to be a red herring. And after spending two-thirds of the story telling us that the target is a particular American official, the movie suddenly offers Mulqueen a vague clue that tells him the target is someone different.

The movie’s publicity took great pains to convince us that The Jackal was not a remake. Well, it is a remake, but not of The Day of the Jackal. With its nasty Russians, a leading man whose Halloween costumes are supposed to pass as disguises, and a vague attempt at a soppy romance, The Jackal comes across as a retread of Val Kilmer’s The Saint, another movie retread that came out at about the same time. And given that movie’s terrible box-office figures, one wouldn’t think the public was crying out for more.

The only person who comes off decently is Sidney Poitier, who seems to project more fiery authority with each passing year. When he points a finger at the Russian baddie and barks, “That’s enough!”, you truly believe the man has been put in his place. The rest of the cast is quite negligible.

No, I haven’t seen The Day of the Jackal, but I have seen plenty of self-important thrillers, of which The Jackal is obviously an offshoot. Except for a couple of brief, nicely done set-pieces, the movie’s musical score gets more worked up about the so-called suspense than a viewer will.