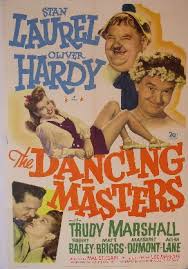 In his great study of Laurel & Hardy, Charles Barr complains about the lack of continuity in The Dancing Masters: “[Stan and Ollie’s] job as dancing masters has no relevance to what follows.” But that’s okay–neither does much of anything else in the movie.

The funny thing is, a lot of L&H’s material is fairly laugh-getting and true to their characters. The trouble is that the movie’s plot, inconsequential as it is, operates almost entirely independently of them. The story of a would-be inventor (Bob Bailey, fresh off his bland stint in Jitterbugs) whose work L&H try to promote has almost nothing to do with L&H (how did this wanna-be heartthrob ever become friends with Stan and Ollie, anyway?). And L&H’s comedy has little to do with the main story.

The comedy direction, by Malcolm St. Clair (the most sympathetic director of L&H’s final Hollywood years) is tolerable, but the real winner here is the casting director. In another of Fox’s gangster subplots, you couldn’t get a more appropriate one than Robert Mitchum (in an early role). And somebody had the smarts to hire The Marx Brothers’ former straight-woman, Margaret Dumont. (If only they’d had the brains to give her something funny to do.)

Other than the cribbing of gags from earlier L&H movies, the only really painful part is the ostensible climax, where Ollie ends up on a runaway bus that happens onto a roller-coaster track (happens all the time), while Stan stumbles into a carnival and ends up as a bull’s-eye for a hit-the-target game. Between the characterization assassinations and the cheap special effects, it’s downright nausea-inducing.

(TRIVIA: The bar set shown in this movie was re-used in the W.C. Fields segment of the Fox movie Tales of Manhattan — which, strangely enough, also featured Margaret Dumont.)