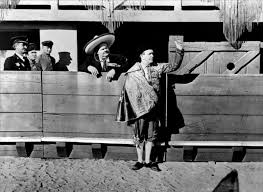 The Bullfighters, Laurel & Hardy’s final film for Twentieth-Century Fox, was once described by L&H biographer Randy Skretvedt as “the one Fox film of theirs I can watch without wincing too much.” In terms of the L&H/Fox films which preceded this one, that makes it a masterpiece.

Indeed, but for a few out-of-character touches (What’s up with Stan and Ollie’s hair??), the movie could serve as an adequate introduction to L&H’s style. L&H biographer Scott MacGillivray’s research disclosed that an uncredited Laurel directed an entire sequence of the film (the contretemps at the water fountain), but Laurel’s mark is, happily, all over this movie. There are many reprises of and variations on familiar L&H routines here. (My favorite: Ollie signs a hotel register with his usual flourish, while Stan glops a simple “X” into the book. The topper: An illiterate hotel arrival admits he can’t sign his name and also writes an “X”; Stan sees it and says, “He’s forging my name!”)

Unlike the other Fox films with their subplots of gangsters and con men, the plot here is mercifully simple: As private investigators on the trail of a villainous woman (Carol Andrews, who provides a great tit-for-tat routine and then is never heard from again), Stan and Ollie are waylaid when Stan’s resemblance to a famous bullfighter forces him to serve as the bullfighter’s double until the real McCoy arrives. Stan and Ollie are blackmailed into cooperating with this scheme when the bullfighter’s P.R. man (Richard Lane) threatens to expose them to his boss (Ralph Sanford), who previously did prison time due to Stan and Ollie’s mistaken testimony, and who has threatened to skin them alive if he sees them again.

Among the movie’s other virtues is Norbert Brodine’s handsome cinematography. This shouldn’t be much of an asset, since high production values were often the only asset that an otherwise indifferent Fox offered to L&H films. But it’s hard not to notice the movie’s glistening lighting and photography, even in still photographs from the film.

The movie is not without its debits, particularly a yawn of a climactic bullfight. But for once, L&H seem to believe in their Fox surroundings (as Richard Lane points out in MacGillivray’s book, Hardy never stopped acting, even when a scene didn’t directly involve him), which helps to put the comedy across. And the final shot is the last of L&H’s freak endings so beloved of Stan Laurel. As Laurel & Hardy’s final Hollywood film, they could have done a lot worse — Utopia, for example.