The stars must be aligned in my favor today! One month to the day after being nominated for my first Liebster Award, my new blogger friend Summer Reeves from Serendipitous Anachronisms has nominated me for my second such award! I’m so proud to have two of them that I decided to adorn my mascot, Jane Russell, with both of my medals. Don’t they look swell on her? 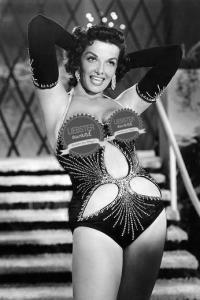 Now, before I bore you again with more of my pretentious commentary, I must of course share the Liebster rules with you. Every Liebster nominee is expected to:

Man, are you in for a painful read! Nevertheless, I shall begin by answering the lovely Summer’s questions. (A couple of these happen to overlap some questions from my previous Liebster questionnaire, so please don’t shoot the messenger.)

1. What movie have you seen more times than necessary?

This is a question that I covered previously. It’s The Rocky Horror Picture Show, which I saw 50-plus times throughout my high school and college years. (Don’t knock it, it was the next-best thing I had to a social life.) Second place goes to practically any Laurel & Hardy movie, all of which I’ve been watching since I was 10 years old.

2. What movie scared you?

This might be the silliest confession of my life. But I saw the much-maligned Twilight Zone: The Movie in 1984 on video, about a year after it had been released theatrically. I watched it on a Friday night, and as it happened, the segment “It’s a Good Life,” about a sociopathic boy who uses magical powers to control his family members’ lives, happened to come on just after midnight. I was freaked out for the rest of the night.

3. What do you wish they would adapt or re-adapt to cinema?

Roll of Thunder, Hear My Cry, an outstanding novel about a black family’s struggles in 1930’s Mississippi. Someone produced a TV-movie version of the story in 1978, and despite a few good moments and the casting of Morgan Freeman (shown at far right) in an early supporting role, the movie didn’t begin to do justice to the sprawling novel.

4. Are there any forthcoming films or TV shows you are excited about?

Last year, I saw a very funny trailer for Cuban Fury, a comedy starring Nick Frost (veteran of Simon Pegg comedies such as Shaun of the Dead) as a plus-sized man who decides to learn salsa dancing to win the heart of a curvaceous salsa dancer he sees. The trailer stated, “Coming this April,” and the Internet Movie Database claims the film was released in America last year, but IMDb shows no ratings or reviews for it, so I think they’re wrong. My guess is that the releasing company decided the movie wasn’t dumb enough to be released in America.

5. What are your favorite Shakespeare-ish films (Derivative work)?

This isn’t a movie, but I just can’t help citing “Atomic Shakespeare,” the Taming of the Shrew parody from the infamous 1980’s TV series “Moonlighting.” Whatever else you could say about that show, it brooked no middle ground; either it was buzzing with off-the-chart quality, or it was laying a huge egg before your eyes. The “Atomic” episode is as farcical-brilliant as anything Mel Brooks ever did, concluding by going the Bard one better with a pro-feminist speech beautifully delivered by Bruce Willis. At present, the episode is posted on YouTube; savor it while you can. 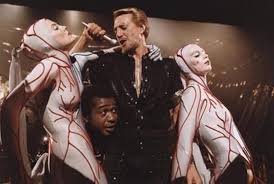 All That Jazz, Bob Fosse’s post-modern musical — full of all the truth about show-business self-loathing, joy, and backstage chicanery that would have made Mickey and Judy blush to admit it. It’s showtime, folks!

Les Blank’s Gap-Toothed Women, a celebration of physical imperfections and one of the most life-affirming movies I’ve ever seen. It would make a perfect curtain-raiser for Steve Martin’s romantic comedy Roxanne (which was coincidentally released the same year). 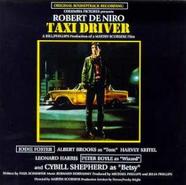 I don’t have much quarrel with anything Bernard Herrmann did, but for a score I listen to from start to finish, I prefer Taxi Driver — equal parts jazzy sax and sinister Gotham.

9. Why did you start blogging?

Since 2000, I’ve been creating websites devoted to my favorite movie comedians, but relatively few people have visited them. Then, a couple of years ago, I noticed that my then-supervisor at work had a blog that she used to promote retail items she liked. She told me she had 1,000 subscribers and that I should do something like that to promote my movie writing. Last year, I finally decided to do it.

10. What do you think is the nicest thing you’ve discovered about blogging?

I really like the cameraderie and the sense of community. I’ve met so many like-minded bloggers whose work is fun to read and who appreciate the kind of opinions that used to get me sneered at when I’d try to share them back in high school.

11. What are your other interests?

Reading and Facebook. I’m in my mid-fifties and fairly boring.

Now, I get to pick on 11 other bloggers. Some of them are people whom I already chose when I answered my first Liebster questionnaire, so don’t get peeved at me for pestering you again!

Diary of a Movie Maniac

Cary Grant Won’t Eat You (Who couldn’t love that title??)

In the Good Old Days of Classic Hollywood

Since I received only a couple of responses from my previous Liebster questionnaire, I’m going to “recycle” it for this one. I’d appreciate it if the above-named nominees would answer the following questions and link your answers blog back to this (my) blog.

2. “Theatrical” is too easy. What’s your all-time favorite TV-movie?

3. The Great Movie Genie is allowing you to permanently change the ending of one movie. Which one do you choose, and why?

4. You’re the latest heinie-kissing Hollywood exec, slavishly following trends. Which movie, good or bad, would you like to sequelize or remake?

5. Name the movie whose screening you’d like to co-host on TCM with Ben Mankiewicz.

6. Describe your most memorable movie occasion — not necessarily your favorite film, but a movie you enjoyed with friends, one that evoked a particular memory, etc.

7. What is your favorite line of movie dialogue?

8. Why are movies special to you?

9. What do you enjoy most about blogging?

10. What is your favorite book about movies?

11. You have your favorite movie actor or actress to yourself for 24 hours to do with what you will. Name, please.

Finally, I must share 11 more facts about little ole me. Some of these are pretty “reaching,” as I used up most of the interesting facts about me on my first Liebster list.

1. When I was 9 years old, a rhinoceros peed on me at the St. Louis Zoo. I didn’t do anything to bring it on. He was caged, and I was a good distance away from him. It’s just that, when my brother-in-law grabbed my sister and their baby and said, “Run for it!”, he understood more about the meaning of a rhino turning his heinie to you than I did.

2. I’m left-handed. That’s nothing spectacular, I know. But at a young age, I was delighted to find out that some of my favorite entertainers, such as Harpo Marx and Paul McCartney, were/are also left-handed.

3. My wife’s name is Kathy. Her younger siblings, in order of birth, were known as Susie and Bobby (now Susan and Bob). When I saw the movie Tim Burton’s The Nightmare Before Christmas, imagine my surprise when Santa Claus started reading his list of “good” children, and he intoned, “Kathy, Susie, Bobby…”

4. My father’s name was — really was — Bill Bailey. And for years, he dined out on his story about meeting Pearl Bailey when he was a custodian at the Chicago Amphitheatre. As he told it, he was cleaning up after her performance one night, and Pearl started making small talk with him. As soon as she found out his name, she sat him down and sang “Won’t You Come Home, Bill Bailey?” just for him.

6. My father married twice in his life. My oldest sibling is my half-sister, who is 78 years old. By contrast, I’m my family’s youngest member, and I’m 54.

7. I’m not a huge Three Stooges fan, but one day, my then-9-year-old son was with me when I happened to watch Gents without Cents, the Stooges short where they perform the classic burlesque sketch “Slowly I Turned/Niagara Falls.” My son fell over with laughter. He re-watched the short with me a couple of times, and he became so obsessed with it that we finally ended up creating our own “miniature” version of it (minus the Curly-type violence so that I wouldn’t hurt him) and performing it for anyone who would sit still for us for two minutes.

8. I did not have cable TV in my man-cave until a couple of weeks ago. We have cable in our home, but there was a TV in everyone’s room except mine. (Not as punishment — I didn’t especially want one.) My mother-in-law recently died, and my son set up her old set in my room. Now I check the TCM schedule as religiously as any of my fellow bloggers. This #TCMParty thing is a hoot.

9. I got a pith helmet the other day. Again, not a major accomplishment, but still…I’ve always wanted one, I guess because I thought they looked cool and because they make me think of Groucho Marx in Animal Crackers. There’s a guy I’ve befriended on Facebook who also likes Groucho; this guy lives in the U.K. He had a pith helmet he was tired of, so for no particular reason, he sent it to me, free of charge. Pretty cool for something I never expected!

Me, in all of my pithy splendor.

10. One summer, 15 years ago, I shaved my head bald. I was a middle-school teacher at the time, and I’d had an especially bad school year. I think that was my way of symbolically shedding the past year. My wife and daughter were horrified by my appearance. It was an interesting experiment, though; I think everyone should do that once in a lifetime.

11. My biggest accomplishment in my life is that I overcame the NO. I was raised by an embittered, widowed father whose philosophy was to settle for whatever crumbs life throws you, and to not ever ask for or expect anything special. Despite that, I grew up to: move across the country to L.A., interview my hero Chuck Jones (and get him to do a personalized drawing of Bugs Bunny for me), and write, direct, and star in plays that got produced locally. Don’t live the way a lot of my relatives lived, and die wondering why you didn’t do some of the things you wanted.

Thanks for your participation and your continued enthusiastic blogging! Jane is also awaiting your replies with much enthusiasm! 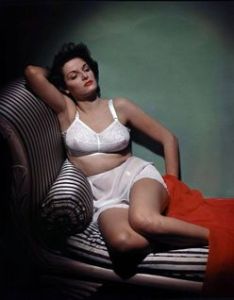