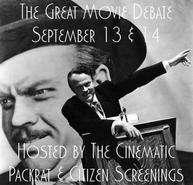 The following is my entry in “The Great Movie Debate Blogathon,” hosted by the blogs The Cinematic Packrat and Citizen Screenings. Be sure to visit them on Sept. 13 and 14 at, respectively, thecinematicpackrat.wordpress.com and citizenscreenings.wordpress.com, and read fascinating “for” and “against” blogs related to classic movies!

I have trouble naming any movie the greatest of all time. But is Citizen Kane one of the greatest? No argument there. Its innovative uses of sound, photography, sets, editing, and good old American dialogue make it a movie feast to be savored over and over.

The facts: Orson Welles had made a national name for himself with radio’s Mercury Theatre, especially its infamous Mars-invasion broadcast on Halloween night in 1938. For his first movie (which he co-wrote, directed, and acted in at age 25), he was given unprecedented freedom to do what he chose — a freedom Hollywood was never foolish enough to extend to Welles again.

Welles worked with Herman Mankiewicz (who produced The Marx Brothers’ early movie comedies, among other notables) on a screenplay initially titled The American. Unfortunately, the American they chose to depict was a thinly disguised version of newspaper magnate William Randolph Hearst, who hit the roof and other skyward destinations when he got wind of the project.

Threatening every punishment under the Hollywood sun, Hearst nearly cowed the studios into buying up all of RKO’s prints of Citizen Kane, to be burned. Fortunately for posterity, Welles sneaked the movie out to some New York critics, where some rhapsodic critics ensured Kane‘s place in cinema history. In the end, even Hollywood begrudgingly awarded Welles and Mankiewicz an Oscar for Best Original Screenplay.

Welles’ Hearstian alter ego was Charles Foster Kane, who forever felt alienated after being separated from his well-meaning mother after she inadvertently inherited and passed on a fortune to him. Thereafter, as one of Kane’s associates put it, he “was unhappy with the world, so he tried to create his own.”

That world included Thatcher (George Coulouris), who seethes when Kane takes over a newspaper and turns into the definition of yellow journalism; Bernstein (Everett Sloane), Kane’s faithful associate; Jed Leland (Joseph Cotten), Kane’s college buddy, who eventually sees through Kane’s scheming; and Susan Alexander (Dorothy Comingore), a modestly talented singer/ex-wife at whom Kane threw money to transform her into an opera star.

All of these people tell Kane’s story — and, besides the movie’s legendary technical wizardry, it is this fragmented version of one man’s life that make Kane so fascinating. Each segment reflects a different mood as well as a different portion of Kane’s life. Thatcher’s part of the story is snippy and officious; Leland’s segment reflects a childhood hero who is soon shown to have feet of clay; and the story of Susan’s singing career uses eerie music (by later-Hitchcock-veteran Bernard Herrmann), vocally and wordlessly, to dramatize a simple woman in the hands of a manipulative tyrant.

And of course, there’s “Rosebud” — Kane’s final utterance, that provides the mystery that these fragments try to unravel. After more than 70 years, the final revelation of “Rosebud” seems nothing less than a cosmic joke that Welles wanted to play on film posterity. But until that punchline at least, Citizen Kane is one of the finest movie concoctions ever — a multi-layered piece that makes anthills of most current Hollywood product.
(Postscript: In what is now a commonplace practice but was fairly radical in 1941, none of the movie’s credits appear until the end. Watch, and be amazed at some of the now-familiar actors and technicians whose first movie this was.)(Heck, even the movie’s trailer is pretty innovative — see below.)