The following is my first of two entries in my ‘One’ of My All-Time Favorite Cartoons Blogathon, being hosted at this blog from Nov. 7-9, 2015! Click on the above banner, and read bloggers’ entries about great ‘toons that have stood the test of time!

Bluto: “With all due respect to the great maestro…”

It’s hard not to think of this thoroughly enjoyable short as a sequence in a long line of classical-music inspired cartoons: first Walt Disney’s The Band Concert (1935), then this one, followed by Disney’s feature-length Fantasia (1940), followed by a huge list of Warner Bros. Looney Tunes too numerous to mention here.

Here, though, as in the later Looney Tunes, the music is mainly a springboard to some very inventive gags lampooning said music’s pretentiousness. The cartoon begins with Popeye conducting a rather undignified orchestra, with Olive Oyl essentially doing Harpo Marx (she even uses one of her spindly legs to reach a string at the far end of her harp), and Wimpy doing Ringo Starr (he uses his cymbal as a “frying pan” to baste his omnipresent hamburger).

It’s not surprising that this makeshift crew might be the target of some derisive laughter. What is surprising is that the laughter comes from a nearby orchestra led by Bluto (in a Leopold Stokowski wig)! Did Bluto get a brace of culture at some point when nobody was looking?

Bluto plays first on the violin, then on the piano, and then he challenges Popeye to do the same. (Because as any concert-goer knows, a conductor has to be ready to improvise on an instrument should one of his orchestra members call in sick.) Popeye fails miserably, to the surprisingly derisive laughter of his usual followers Olive and Wimpy, who go off with Bluto to join his ensemble. (Olive, honey, you’re belittling Popeye after playing a harp with your foot??)

A dejected Popeye reaches into the piano and finds an errant can of spinach, which he munches on unthinkingly. Next thing he knows, he’s playing like Duke Ellington and scat-singing like Ella Fitzgerald. So after all this time, he couldn’t have figured out beforehand that the spinach might pep up his musical outings?

In a grand finale, Popeye plays and conducts flawlessly, gets a bout in with Bluto for good measure, and squeezes in a mock-classical version of his theme song for a “strong-to-the” finish. Bravo!!

(If you enjoyed this blogathon entry, please click here to read my second entry about the terrific TV cartoon, Tiny Toon Adventures.)

Swee’pea is by far my least favorite Popeye character; even more so than Olive when she’s in Bluto’s clutches, Swee’pea exists for the sole purpose of being rescued (and annoyingly oblivious to the trouble he’s caused). So I’m doubly sorry that the Fleischers’ final Popeye cartoon is another routine Swee’pea entry. One has to believe that the Fleischers were indeed yanked off the Popeye series with no forewarning and that if they’d had a chance, their finale would have been far more ambitious.

Olive drops off Swee’pea so that Popeye can spend the day babysitting him aboard ship (because we all know that Marines had nothing better to do in 1942). Swee’pea, to no great surprise, gets loose aboard the ship and nearly causes more havoc than the Japanese could have done on their own. This cartoon brings you right to the brink of wishing that Swee’pea could have gotten what he deserved — maybe a Wile E. Coyote-like ride on one of the rockets he set off, or getting scooped up by Child Services once and for all.

Well, Messrs. Fleischer, it was nice while it lasted.

Popeye and Olive enter a dance contest, but Popeye continually shows off his two left feet. Bluto wins Olive over on the dance floor, causing Popeye to conclude, “I guess I have no sex appeal.” (It took a dance contest to show him this.) Popeye drowns his sorrow in a bowl of spinach. Do you suppose that will help?

Worth the entire cartoon just to watch Popeye strut his post-spinach steps on the dance floor. Wimpy’s great as the “eliminating” contest judge, too. 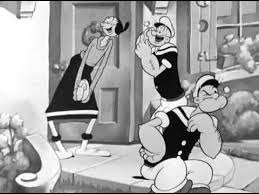 Popeye’s roommate Wimpy overhears Olive inviting Popeye over for a hamburger dinner. Wimpy then goes to an outrageous extreme to impersonate Popeye and get the dinner.

An interesting premise quickly becomes obvious (even by cartoon standards of disbelief-suspension) and mechanical. You kind of lose sympathy for Popeye when all it takes to fool him is some clown who puts on a Popeye Halloween costume and chirps nothing but, “I’m Popeye.” The best gag comes early, as sleeping roomies Popeye and Wimpy play “toesies” to decide who should answer Olive’s incoming phone call.

A Clean Shaven Man is most notable for its depictions of (a) the grotesqueries it inflicts upon Popeye and Bluto, and (b) the conspicuous fickleness of Olive Oyl.

The cartoon begins with The Boys at a greasy-spoon restaurant, looking starry-eyed at waitress Olive Oyl as she seductively (at least for her) sings the title song. Bluto is his usual furry self and Popeye is more five-o’clock-shadowy than usual, so they figure that if all it takes to impress Olive is a shaven face, they’d better not press their luck.

The duo go to Wimpy’s Barber Shop (strangely labeled “Wimpy’s Bber Shop” in this cartoon’s cheapo colorized version). But Wimpy is — lucky for them, probably — off getting a shave somewhere else, so they agree to shave each other. Why Popeye would even consider letting Bluto go at him with a straight razor is one of this cartoon series’ Great Unsolved Mysteries, but so be it.

Popeye does an expert job in cleaning up Bluto’s kisser; unfortunately, it doesn’t help Bluto a bit. Just as a make-up job only makes Olive Oyl homelier (For Better or Worser), an ostensible clean-up just makes Bluto look like…well, at least like someone with whom I wouldn’t leave my child alone in a dark alley.

Then Bluto returns the favor to Popeye, and Popeye seemingly gets what he deserves. Bluto makes indentations in Popeye’s face that a tractor would have done more gracefully, and he somehow even sneaks a hair ribbon onto Popeye’s bald pate. (The movie’s hands-down “Eeeew” moment comes when Bluto tests a straight razor by flicking it on his tongue. And 1950’s parents worried about the fist fights in Popeye cartoons!)

When Popeye protests, Bluto beats him up and drags him off to scare Olive. Popeye tries to open his can of spinach, but for once Bluto catches on; “None o’ that stuff!”, Bluto yells, and he pitches the can away. Unfortunately, Bluto’s one moment of intelligence vanishes when he ignores the can’s rolling back into Popeye’s grip.

Popeye whips Bluto for the umpteenth time and then drags him off to startle Olive. Sadly, Olive does a better job of shocking The Boys; she walks past them while arm-in-arm with a man whose beard nearly drags on the ground. The Boys punish themselves by kicking each other’s butt (literally, for once) as the film fades out.

Postscript: In his book Hollywood Cartoons, Michael Barrier gives short shrift to a gag in this movie’s climax, where Popeye spins a barber’s chair off its base to press Bluto against a wall, and then the chair swings back onto the base. Barrier calls this a “gaucherie” because “There is no sense that this might somehow be physically possible; the seat simply floats.” Physically possible?? Hey, Mike, news flash — it’s a cartoon! You know, the kind of flick where Mickey Mouse uses a hippo’s teeth as a xylophone?? If only Popeye were still around to belt a cartoon deconstructionist instead of Bluto.

On shore leave in South America, sailors Popeye and Bluto compete for the affections of one Olivia Oyla. Ay carumba!

Something about sassy music seemed to inspire the Fleischers. This one’s a gem from the start, with Popeye and Bluto shaking their thangs with as much liberty as great animation will allow. The cartoon is peppered throughout with superb throwaway gags, from Bluto’s photographic memory, to the “CENSORED” sign that briefly covers a Latin dancer’s suggestive region.

When they get to the local cafe, Popeye claims he “can’t dance no conjure.” But when Bluto rudely steps in, Popeye downs the requisite can of spinach, and it’s Morning, Noon and Nightclub all over again. The ending is novel, too — instead of Olive getting her men, the local military police nab them instead, for trying to start a riot — which they do, at least for the happy cartoon-viewer. An absolute hoot.

“Oh, I’m king of the Mardi Gras, What’s more, I’m the whole bloomin’ show…” (Sung by Bluto and Popeye at various times in this cartoon)

After years of listening to that “one-eyed freak” warble his theme song, Bluto finally gets a theme of his own (in retrospect, a warm-up for his braggadocio number in Sindbad the Sailor) — only to have Popeye appropriate Bluto’s song, too.

This bit of filching comes about when Bluto and Popeye have neighboring sideshow acts at Coney Island. Bluto has a huge crowd awaiting his exploits; all Popeye has is Wimpy daydreaming and eating a burger.

Popeye, who usually respects others until they get in his personal space, loses a few points here for maliciously sabotaging Bluto in mid-act. In a desperate bid for attention, Bluto is reduced to wrapping a live snake around his neck and muttering, “Don’t anyone wanna see a guy choke to death for free?”

Bluto, of course, tries to take revenge by taking Olive. Olive clambers on to a roller-coaster ride, followed by Bluto and then Popeye, and the Fleischers’ as-usual-astounding animation and perspectives handily prove that the ride wouldn’t pass the most cursory state inspection. Popeye and Bluto soon end up in the same roller-coaster car and are so intent on beating the bejesus out of each other that they don’t even notice they’re a few miles above Earth while they do it.

After getting his usual spinach fix, Popeye’s punches ultimately land Bluto at the wrong end of a carny’s strong-man contest, where his head causes him to hit the bull’s-eye thrice (perhaps as punishment for Bluto’s stealing a box of cigars from a similar carny in Popeye the Sailor [1933]). Olive ends up safely in the arms of Popeye, who temporarily forgets his theme music and melodically declares himself King of the Mardi Gras.

(Trivia: As most Popeye-philes know, this was the first cartoon in which Popeye’s voice was contributed by Jack Mercer. Mercer was a Fleischer animator who imitated Popeye’s previous voice-man, Bill Costello, for his own amusement and was hired to do the real thing when Costello went on an unplanned vacation and was then dismissed. As generations of Popeye fans agree, Mercer definitively passed the audition.)