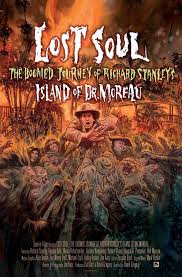 I make it a point never to gawk at car wrecks while I’m driving. But I was recently fascinated by the cinematic equivalent of one. It’s an absorbing documentary titled Lost Soul: The Doomed Journey of Richard Stanley’s Island of Dr. Moreau. (I learned about this movie thanks to Noah Redfield’s contribution to the blog Pop Chomp, which I hereby happily acknowledge.) You don’t have to know anything about Richard Stanley or have seen the infamous Marlon Brando movie of Moreau (Sorry, I plead guilty on both counts) to appreciate this tale of a big-budget movie gone haywire.

The story is that Stanley (above) initially made a name for himself as the director of two independent movies, the apocalyptic Hardware (1990) and the supernatural horror film Dust Devil (1992). Stanley is then hired by New Line Cinema, then a mini-major studio making a name for itself, to realize his dream of filming a full-on adaptation of H.G. Wells’ novel The Island of Dr. Moreau.

But from the start, forces conspire against Stanley to thwart the production. New Line thinks it has pulled a coup by getting Marlon Brando to star, but when Brando’s young daughter commits suicide shortly before production begins, he remains incommunicado from the movie for a long time to come. A hurricane comes to the Australian island where the movie is to be filmed and sweeps away most of the set. But Stanley’s biggest obstacle is a psychological one. Val Kilmer, a then-white-hot star who is the movie’s supporting actor, balks at Stanley’s every direction and runs roughshod over the cast and crew.

When it’s clear that Stanley can’t handle this big-budget movie, New Line unceremoniously removes him from the set and replaces him with veteran director John Frankenheimer (The Manchurian Candidate), whose main interest is in working with the legendary Brando. But when Brando shows up “in character” wearing gauze and kabuki make-up and he proceeds to dictate one crazy script idea after another, it’s clear that nobody will be able to guide this train back onto the track.

Unlike the misguided Moreau movie, Lost Soul director David Gregory offers a clear-headed entertaining story of what went wrong. The movie gallops along at a terrific clip, aided by footage from the movie and from cast members taken on the set, as well as interviews with New Line executives, Richard Stanley, and Moreau actors Rob Morrow, Marco Hofschneider, and Fairuza Balk.

As Redfield points out in his blog, there really are no longer any flop movies; between theatrical release, DVD, cable, and Netflix, every movie now creeps into the black sooner or later. But even as recently as 1996, a bloated, big-budget mess such as The Island of Dr. Moreau could be branded a failure just for quadrupling its original budget and sacrificing its original vision (What tentpole movie doesn’t these days?). If anything, Lost Soul proves that they just don’t make bad movies like they used to.