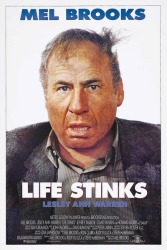 Life Stinks is another chapter in the ongoing question, Whatever happened to Mel Brooks’ sense of comedy? It starts out nicely enough, with Mel as Trump-like mogul Goddard Bolt (“You can call me God”), who accepts a bet that he can’t live on the streets for 30 days. But the moment the movie hits the streets, it turns into a pathos-laden mess, with occasional “funny” bits interjected (Mel sees a black kid break-dancing for money and tries to do a vaudeville buck-and-wing, yuk, yuk).

Leslie Ann Warren is nothing short of wasted. The worst part is this movie’s musical number, in which Brooks and Warren do a silent dance to Cole Porter’s “Easy to Love.” Brooks’s musical parodies are usually the highlights of his movies; here he plays the whole thing straight, like a dancing excerpt from an aging guest star on “The Carol Burnett Show” (on which Rudy DeLuca, this film’s co-writer, began his career).

Go rent Charlie Chaplin’s The Kid, which covered the same ground 70 years before and did it a lot better.