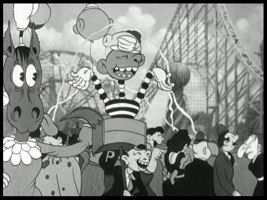 “Oh, I’m king of the Mardi Gras, What’s more, I’m the whole bloomin’ show…” (Sung by Bluto and Popeye at various times in this cartoon)

After years of listening to that “one-eyed freak” warble his theme song, Bluto finally gets a theme of his own (in retrospect, a warm-up for his braggadocio number in Sindbad the Sailor) — only to have Popeye appropriate Bluto’s song, too.

This bit of filching comes about when Bluto and Popeye have neighboring sideshow acts at Coney Island. Bluto has a huge crowd awaiting his exploits; all Popeye has is Wimpy daydreaming and eating a burger.

Popeye, who usually respects others until they get in his personal space, loses a few points here for maliciously sabotaging Bluto in mid-act. In a desperate bid for attention, Bluto is reduced to wrapping a live snake around his neck and muttering, “Don’t anyone wanna see a guy choke to death for free?”

Bluto, of course, tries to take revenge by taking Olive. Olive clambers on to a roller-coaster ride, followed by Bluto and then Popeye, and the Fleischers’ as-usual-astounding animation and perspectives handily prove that the ride wouldn’t pass the most cursory state inspection. Popeye and Bluto soon end up in the same roller-coaster car and are so intent on beating the bejesus out of each other that they don’t even notice they’re a few miles above Earth while they do it.

After getting his usual spinach fix, Popeye’s punches ultimately land Bluto at the wrong end of a carny’s strong-man contest, where his head causes him to hit the bull’s-eye thrice (perhaps as punishment for Bluto’s stealing a box of cigars from a similar carny in Popeye the Sailor [1933]). Olive ends up safely in the arms of Popeye, who temporarily forgets his theme music and melodically declares himself King of the Mardi Gras.

(Trivia: As most Popeye-philes know, this was the first cartoon in which Popeye’s voice was contributed by Jack Mercer. Mercer was a Fleischer animator who imitated Popeye’s previous voice-man, Bill Costello, for his own amusement and was hired to do the real thing when Costello went on an unplanned vacation and was then dismissed. As generations of Popeye fans agree, Mercer definitively passed the audition.)