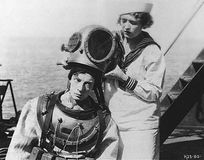 As The Navigator was Buster Keaton’s most financially successful (up to that time) of his independent movies; because Keaton worked so hard on it and considered it one of his best feature films; and because it was added to the National Film Registry in 2018, one wants to like it more than one eventually does. But coming as it does after the daring and inventiveness of Sherlock Jr., The Navigator can’t help but be a bit of a letdown.

The legend goes that Keaton’s art director, Fred Gabourie, found out about a five-thousand-ton ocean liner, the Buford, sitting in a San Francisco boat yard, just waiting to be sold for scrap. Keaton immediately began thinking about the comic possibilities of the ship and arranged to get it. Yet in hindsight, The Navigator seems like a 1920’s version of latter-day big-scale comedies such as Ghostbusters or Men in Black, where the gargantuan setting threatens to overshadow the comedy.

The movie begins promisingly, as Keaton reprises his Saphead persona of the clueless, indulgent rich boy, here named Rollo Treadway. Rollo is so spoiled that he decides on a whim to get married – without first consulting his girlfriend Betsy (Kathryn McGuire), who lives just across the street – and must have his chauffeur maneuver his car to the girl’s house (!) so that he can propose to her.

In a strange bit of plotting, Betsy turns down Rollo’s proposal and is then shown to be in tears for having done so. Why? Was Keaton afraid that Rollo’s derring-do aboard the ocean liner wouldn’t be plausible enough to show why Betsy would eventually want to marry him? The normally adventurous “scenarist” Keaton shows a bit of cowardice here.

Anyway, via some elaborate (not to say credibility-stretching) plot twists, Rollo and his girl end up aboard the same deserted ocean liner, after which the comedy is somewhat hit-and-miss. For every bull’s-eye gag, there are a couple of duds. For the past few decades, much has been made of how the leading ladies in Keaton’s movies are well-meaning but dumb. But Rollo is no prize package, either. When Rollo can’t even hold a plate right side up (one of the “gags” here) and, at one point, nearly drowns the girl who is trying to scoop him out of the ocean, one tends to think he gets what he deserves. (For her part, Kathryn McGuire is Buster’s physical equal here, giving as good as she gets.)

The movie’s gag mechanisms completely break down in its final third, as Rollo and Betsy are threatened by backwards savages, a plot device worn thin by decades of comedies such as “Gilligan’s Island.” We’re supposed to root for this couple who’ve managed to survive for weeks alone on a ship but threatened to be outwitted by primitive tribesmen. After a while, the cat-and-mouse game of Buster-vs.-the-primitives gets a bit tiresome, as does a closing gag swiped from Keaton’s own The Boat.

One is grateful for any excuse to see Buster Keaton at his peak on-screen. But in The Navigator, a large inanimate object seems to get the best of Buster Keaton. It doesn’t seem (sea)worthy of him.

(Trivia: Navigator co-director Donald Crisp, with whom Keaton had much-publicized disagreements, can be seen in a “cameo,” in a still photo as a captain whom Rollo misinterprets as a ghost.)