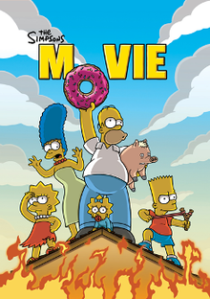 Most reviews of The Simpsons Movie have the same curious tone: They complain that the movie isn’t as edgy or funny as they expected, and then they say that the movie is funnier and edgier than most movies that came out at the same time.

I’ve always found the “Simpsons” TV series hilarious, but I don’t know if it was ever as edgy as people said it was. Its main strength has always been to come right up to the edge of subversion, only to end up embracing the nuclear-family concept.

Since the movie is 89 minutes long (four times the length of a TV episode), it has a broader spectrum in which to play. But it never dawdles; as with the series, the movie is briskly paced, funny, and incisive. Would that every movie comedy met that standard.

Amazingly, this cartoon version of an epic — it uses 15 past and present “Simpsons” writers, and the show’s hundreds of supporting characters — begins with only the idea of the series’ anti-hero, Homer Simpson, falling in love with a pig.

From that moronically simple plot development, the movie blossoms like a flower on steroids. It takes trips physical (north to Alaska) and psychological (Homer goes hallucinogenic). It has erudite references that will sail over kiddies’ heads, and it gets its PG-13 rating by having Bart Simpson briefly doing the full monty.

It takes pot-shots at its parent company Fox and their rival Disney, as well as squeezing in a public-service announcement from Tom Hanks.

And strangest of all, it is often downright touching. (At one point, Homer’s put-upon spouse Marge, voiced by Julie Kavner, leaves Homer a “Dear John” video that might be — no kidding — Kavner’s best-ever acting job.)

As with the show, The Simpsons Movie does what the best comedy does: take a jaundiced eye at the kind of insipid behavior that most of us are either too polite or too ignorant to point out.

I’m cynical about most TV-to-movie spin-offs, but The Simpsons Movie shows that it can be done right, if its makers care enough about the quality. (Oh, and maybe your TV show has to last for 18 seasons first.)