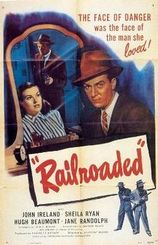 All right, you mugs! I’ve been spoiling you rotten the last couple of weeks, showing you gangster movies from big studios like Columbia and Warner Bros. with stars like Richard Widmark and Jimmy Cagney. This week we’re going back to Poverty Row studio PRC, where the closest you’ll get to a big-name star is Beaver Cleaver’s dad, Hugh Beaumont!

Railroaded! is the 1947 saga of innocent teenager Steve Ryan (Ed Kelly), who gets framed for a robbery that happened to involve the (stolen) laundry truck that Steve drives for a living. Since Steve was unfortunate enough to leave his monogrammed scarf in the truck, the cops seize upon this weak link as though it was gold-star Exhibit A just to get Steve, who has no previous record of any wrongdoing, behind bars in record time.

We find out soon enough — well sooner than clueless cop Mickey Ferguson (Beaumont), anyway — that the real culprit is Duke (John Ireland), a monotone, paranoid criminal with a fetish for using perfumed bullets. (Yes, you read that right.) Ferguson starts examining the clues and ends up getting caught in a love triangle between Steve’s sister Rosie (Sheila Ryan) and Duke.

The most surprising name in the credits is that of director Anthony Mann, who went on to better efforts such as Winchester ‘73 (1950, with James Stewart). Mann tries hard here, but he fills the screen with such ultra-noir-ish shadows, you’ll have trouble telling the heroes from the villains.

On a scale of 1 to 5 fannies, I give this one a 3. The movie’s style doesn’t completely overcome its routine substance, but you’ll have to love the way that the cops ignore 57 varieties of the Ryan family’s civil rights in order to make their case against Steve stick.