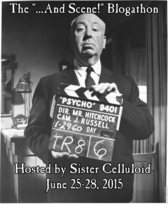 The following is my entry in the “…And Scene!” Blogathon, hosted by the ethereal Sister Celluloid at her blog from June 25-28, 2015. Click on the banner above, and read bloggers’ critiques of their favorite single movie scenes!

For this blogathon, I have chosen to write about “Lookin’ for Trouble,” a musical number performed by Jane Russell in a notorious Howard Hughes production, The French Line. This scene has always stuck with me for many reasons — a number of which will seem obvious once you actually view the number (embedded below), but for some subtler reasons as well.

At the time of this movie, Howard Hughes owned RKO Radio Pictures and was in the process of running the studio that had produced King Kong, Citizen Kane, and some classic Astaire-Rogers musicals into the ground. Hughes had been obsessed with Russell’s (admittedly impressive) bustline ever since he’d first met her and did his best to exploit it — first in The Outlaw (1943, Russell’s movie debut), and now in this movie.

Here, Russell plays Mary Carson, a wealthy Texas oil heiress who is unlucky in love. Her suitors either want her for her fortune, or they get intimidated by the thought of a woman with power. Determined to find herself a man, Mary poses as the model of dress designer Annie Farrell (Mary McCarthy) while onboard an ocean liner heading for France. On the ship, Mary meets Pierre (Gilbert Roland), and complications ensue, primarily because Pierre seems to want her for her body in the same way as previous men wanted her for her money.

At one point, Annie holds a fashion show on the ship to display her clothing designs. Mary appears in the show very demurely at first, wearing a white gown that covers her from head to toe. But in record time, Mary sheds the gown to reveal herself in a barely-there bathing suit that New York Times movie reviewer Bosley Crowther aptly described as “a seven-ounce glorified bikini.”

From there, Mary goes on to display and shake everything God gave her in a rousing musical number titled “Lookin’ for Trouble.” Unlike Russell’s charming number “Ain’t There Anyone Here for Love?” from Gentlemen Prefer Blondes (the movie which inspired Hughes to create this musical), here there’s no subtext whatsoever. Like Russell’s physique, the song is in-your-face; Mary makes it quite clear, albeit in 1955 terms, that she’s out to get laid.

Russell spent two pages of her autobiography describing the, er, trouble involved in getting this number committed to film. Initially, Hughes tried to get her to do the number while wearing only a real two-piece bikini. At the time, bikinis were worn only in France.

Russell wrote that when she tried on the bikini, “I stood before my horrified camera crew, feeling very naked.” (However, Russell’s embarrassment over the bikini did not extend to her autobiography, which contains the following photo of Russell wearing (a) said bikini, and (b) a s**t-eating grin.)

Does this look like an embarrassed woman to you?

In any case, Russell refused to film the number until she was given wardrobe that covered her up a little better; hence, the seven-ounce bikini substitute.

The bikini photo is a perfect metaphor for the musical number that inspired it. In her book, Russell explains how her conscience bothered her while performing this number:

“The only problem, as I saw it, was that it was never made clear in the story that the millionairess did the naughty number to get even with her fella [sic], to make him mad. I begged them to put in one short scene to show some motive for it. They all looked at me like I was bananas…Finally, a scene was shot. No film was in the camera, I’m sure, for I never saw it, nor did anyone else.”

And yet, watch Russell perform “Lookin’ for Trouble.” This does not look like a woman who is ashamed to be throwing her fulsome body all over the screen (and the movie was originally released in 3-D). Even though the number is not as sexually explicit as anything in modern-day cinema, it quite clearly makes the point that Russell’s character is looking for…well, dare we replace the word “trouble” with S-E-X?

It seems to me that this number, like much of Russell’s movie career, is trying to have it both ways: Getting men to go popeyed with lust, while Russell tells us not to read anything nasty into her enthusiastic shimmying and hip-grinding. In any case, the only way Russell could display any more of her sexuality in a movie is if she had gone all the way and gotten…very naked.