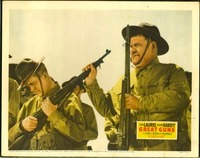 Great Guns is the beginning of the end for Laurel & Hardy. As has been well-documented elsewhere, Stan and Babe ended their long association with Hal Roach thinking they would be able to call the shots on their own movies from now on. Instead, they signed with Twentieth Century-Fox and were thoroughly indoctrinated into the studio system, wherein their films were shot out of sequence; their characters, make-up, and dialogue were put through paces alien to them; and worst of all, Stan’s behind-the-scenes work and knowledge were shunted aside in favor of big-studio methods of filmmaking.

The Marx Brothers went through a similar downhill phase at M-G-M, finally figuring out what made their movies a hit and then not being allowed to do them that way. And as Marx biographer Joe Adamson said about At the Circus, what’s so frustrating about Great Guns is that so much of it is infuriatingly right for Laurel and Hardy. There’s enough recognizable L&H material to make you (a) think this movie could have been a comic gem, and (b) sit through the stuff that’s a bit more painful to watch.

The story is that Stan and Ollie are caretakers for Dan Forrester (Dick Nelson), a pampered rich boy. When Dan gets a draft notice from the Army, Stan and Ollie join up as well to give Dan the supervision they think he needs. But Dan does quite well on his own, leaving Stan and Ollie to cope with their brusque sergeant.

L&H had previously worked the military for laughs in Pack Up Your Troubles and the opening of Block-Heads, so it’s not unreasonable to hope for the best here. But again, as has been noted many times before, Fox’s approach is what does them in. First off, the studio make-up looks them look older than they appeared in photos and live appearances ten years later. This, combined with some of the script’s more feeble gags, makes them look like feeble old men doing third-rate versions of themselves. Also, everyone in the movie, from their sergeant right down to the boy that Stan and Ollie look out for, refer to them in a derogatory manner, the implication being that since everyone else thinks they’re dumb, we the audience are invited to do so too.

Another problem is what we might call lack of verisimilitude. Most of the other draftees look a little long in the tooth themselves. The toughs who steal Stan and Ollie’s breakfast look about as authentically military as Walter Long or Rychard Cramer. And when one of them makes a supposedly funny crack about Hardy’s weight, you know the moviemakers are clutching at straws. It’s like hiring Sir Laurence Olivier and asking him to re-enact his role as Neil Diamond’s hand-wringing Jewish father from The Jazz Singer.

But in the midst of this unfamiliar terrain, some comedy manages to sneak through. Stan has a wonderful scene where he gets tired of waiting in the mess line, breaks through (not maliciously, but through the usual Stanley obliviousness to reality), and has most of his breakfast together before he’s caught. In a milder version of a similar scene in The Flying Deuces, Stan and Ollie ruin their first dress parade by their well-intended familiarity (they ask the senior officer to take their picture). And one scene repeats a gag from their silent short The Finishing Touch. (Unfortunately, this was to become the norm at Fox; most of their funniest moments in these later movies were cribbed from routines in their earlier films.)

Mostly, though, it’s a case of Laurel & Hardy triumphing over their material, rather than within it. The Boys are put through snappy patter that’s obviously intended to turn them into Abbott and Costello (the movie’s very premise is noticeably ripped off from A&C’s Buck Privates), and they’re put through dress-up routines and acres of unfunny dialogue that’s not at all suited to their characters. (Stan’s endearing horse-laugh is much on display here, but it’s far more out-of-character here than it was in Way Out West.) Great Guns is tolerable enough (especially when you know there’s worse to come); just don’t confuse it with “typical” Laurel & Hardy.