Dec. 29 happens to be a dual anniversary for Laurel & Hardy releases: one of their silent shorts, and one of their most popular talking features. However, being the contrarian that I am, I find this double-feature to be the perfect opportunity to discuss why I find Laurel & Hardy’s view of the female gender so relentlessly nasty, and therefore, not especially laughter-inducing. 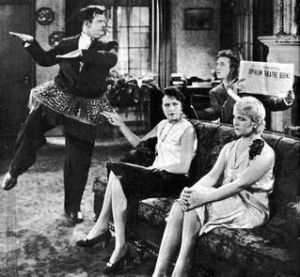 We Faw Down is like a sitcom gone sour. Stan and Ollie’s wives start out hostile and suspicious, and they go downhill from there. Stan and Ollie are innocently caught in nasty circumstances, yet far from being terrified, they seem strangely nonchalant about the whole thing, as if they want to get caught.

There might be some potential for (very misogynist) comedy here, but the hostility of the situation kills every possibility. As Ollie’s suspicious wife, Vivien Oakland (later to make a kinder impression in L&H’s Scram! and Way Out West) has a sneer that could seemingly melt the celluloid that preserves it. When Stan and Ollie find themselves (innocently enough) in the apartment of some women other than their wives, they’re unusually unconcerned about being two married men sitting around some women’s apartment in bathrobes. Then there’s the climax, where Ollie tries to bluff his way through his wayward afternoon, his wife’s smothering gaze defeating him at every turn. And when Ollie admits defeat in his lie, Stan uncharacteristically laughs his head off at Ollie’s plight. He seems to be rehearsing for a similarly out-of-character laugh jag in the later Great Guns.

The movie is most celebrated for its closing gag, where Ollie’s wife blasts at him with a shotgun and numerous men, hearing the shots, jump out of windows in varying states of undress. Generations of L&H fans and biographers have never noted how one of L&H’s most celebrated gags has little to actually do with L&H, and a lot to do with a poisonously cynical view of marriage.

Given the unrelieved hostility of the wives in Sons of the Desert, and Stan and Ollie’s actions which take their cues from such nastiness, it’s hard not to read this movie as reverse misogyny as well. The movie’s premise is that the boys’ lodge (which supplies the movie’s title) is having its annual convention in Chicago, and all members are required to attend. Stan immediately starts to puddle up when he considers how his wife will react to this news, but Ollie only spouts the kind of “king of the castle” malarkey that Ralph Kramden would spew so continuously decades later on “The Honeymooners“: “I go places and do things,” declares Ollie, “and then I tell my wife!” The remainder of the movie takes great pains to show that, if Ollie does indeed go places and do things, telling his wife about them is the last thing he wants to do.

Mrs. Hardy (Mae Busch) barely tolerates Stan’s presence in their apartment, a sign of worse things to come. When Ollie tries to tell his wife that he will be attending the Chicago convention, he endures a lot of crockery on his head courtesy of Mrs. Hardy. After Stan witnesses this outburst, it’s his turn to play bantam rooster, telling Ollie (in a quite out-of-character speech) what a fool he is to endure such behavior. He is about to tell Ollie what he’d say to put Mrs. Laurel in her place, when lo and behold, Mrs. Laurel (Dorothy Christie) appears — shotgun in hand, having just come back from a day of hunting(!). Stan melts under his wife’s glare, tucks his tail between his legs, and heads on home (to the apartment next door).

In what appears to be a creation of one of situation comedy’s more enduring cliches, the boys then contrive to have a fake doctor (actually it’s a real doctor, albeit a vet) examine Ollie and tell Mrs. Hardy that Ollie needs a cruise to Honolulu to calm his nerves — and of course, Stan needs to go with him. The ruse actually works. Unfortunately, the wives then hear news that the cruise ship which Stan and Ollie were supposed to have boarded has sunk. Strangely enough, this scene allows the wives their only moment of affection, as they anxiously await news of the ship’s survivors. To take their minds off their worries, they go to see a movie, which is prefaced by a newsreel showing none other than Stan and Ollie clowning at the Chicago convention. The wives’ grief quickly turns into what, in male terms, would be deemed a p***ing contest, as Mrs. L. and Mrs. H. determine whose husband is the bigger liar.

Through contrivances as yawn-inspiring as anything in L&H’s later Fox movies, the boys end up in their pajamas, in the rain, accompanied by a policeman. The wives sit the boys down and ask them for their account of what really happened. They manage to contrive a tale only a couple of child-minded adults could concoct (they made it home before the rescue ship arrived, by ship-hiking), until Mrs. Laurel corners Stan once and for all. Stan tearfully acknowledges the truth and goes next door with his shotgun-wielding wife to face what looks like his final fate.

Mrs. Laurel won’t be shooting any game tonight, though — she’s happy that she got the best of Mrs. Hardy, and she rewards Stan with chocolates and cigarettes. Stan hears a commotion next door and goes to investigate, finding Ollie crouching from another round of crockery.

For all of the wonderful comedy that Stan Laurel and Oliver Hardy brought to cinema, and at the risk of sounding like a member of the PC police, I think the anti-female stance of Laurel & Hardy’s movies should at least be re-examined, if not downright deplored.