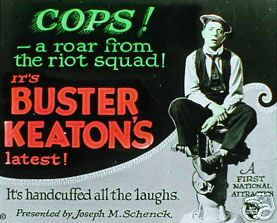 Nothing ever came easy for Buster Keaton – the person and the stone-faced persona – and Cops is nothing less than a deconstruction of The American Dream. It begins with Buster behind (symbolic) bars and ends with him preparing to get put behind the real thing. In between is a hilarious disintegration of the Horatio Alger story and – for once – a storyline that thoroughly justifies Buster’s eventually chased by the majority of L.A.’s Finest.

Naturally, the root cause of this havoc is Buster’s pining for a girl, who tells him, “I won’t marry you until you become a big businessman!” Like all good Americans, Buster expects this to be handed to him on a silver platter – and in its own skewed way, it does. Buster tries to assist a rich man getting into his car, is thoroughly rebuffed, happens upon the rich man’s wallet (accidentally dropped), and rewards his own good intentions with a wad of cash from the rich man’s wallet.

A con man sees Buster with the wad of money, notices a nearby man loading his family’s possessions into a horse-and-buggy for moving, and launches into a sob story for Buster: He has been kicked out of his house and must sell his furniture, or his family will starve. To prove he is truly a “big business man,” Buster “buys” the furniture at an immodest price (determined by the con man, who peels off the requisite amount of dollar bills he thinks Buster should pay him).

When the furniture’s actual owner comes out to finish loading the cart, Buster tries to help the man; but the man thinks Buster is only a delivery boy and is not expected to help load the cart. Buster, in turn, decides he’s quite happy to let this total stranger load his stuff up for him; he pulls up a seat and waits patiently for the man to finish.

A cynical title tells us, “Once a year, everyone in town knows where they can find a policeman.” Cut to a huge city parade with thousands of policemen on the self-promoting march. Into this milieu wanders Buster with his buggy; not realizing he’s raining on someone else’s parade, he politely and continuously tips his hat to the admiring crowd. An anarchist (played by co-director Eddie Cline) throws a lit bomb into the parade; it lands next to Buster, who unthinkingly lights a cigarette with it and then discards it. 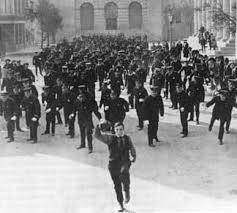 When things go boom for Buster, they really go boom. The ensuing chase, a marvel of endless invention and variation, contains at least two of Keaton’s most iconic images: Buster rounding a corner, eventually followed by the members of every nearby police precinct; and Buster evading the cops by casually thrusting his hand out, latching onto a passing car, and flying out of sight like a banner. (There’s also a priceless intertitle, as one officer commands another to “Get some cops to protect these policemen.”)

Miraculously, Buster pulls off his greatest dream: He gets every one of the pursuing cops locked up in their own jail and throws away the key. But when Buster’s love walks by and shuns him (she’s the mayor’s daughter and got a full view of Buster’s parade disruption), he fetches the key, opens the jail door, and falls into a sea of vengeful hands. An ominous “The End” title depicts Buster’s porkpie hat atop a tombstone.

How can one make a success of oneself, Keaton seems to be asking, in a world where con men sell you furniture you don’t own, a cigarette lighter can destroy a crowd, and policemen celebrate their lack of policing? Like the Marx Brothers’ later sound feature Duck Soup, Cops depicted a nightmare mirror world that has come to resemble the real world more and more with each passing year. For this and other not-so-small reasons, this movie was selected to the Library of Congress’ National Film Registry 75 years after its making. It will continue to prove as timeless as any of Keaton’s best work.