The following is my entry in “The Luck of the Irish Blog o’ Thon,” hosted by the blog Silver Scenes from March 15 to 17 in honor of St. Patrick’s Day. Click on the poster above, and read a variety of blogs celebrating cinema’s Irish heritage!

Famed silent film comedian Buster Keaton was born Joseph Frank Keaton on Oct. 4, 1895. Buster’s father, Joe, was of Scottish/Irish heritage. Keaton’s humor was not overtly Irish by any means. Yet there are certainly overtones of his ancestry throughout his life and his films. 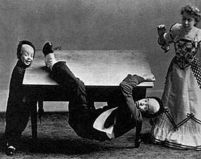 Keaton began his show business career at the age of three as one of “The Three Keatons” (shown above), consisting of himself, his father Joe, and his mother Myra. The act was best known for Joe’s treatment of Buster. When Buster would goad his father on-stage, Joe made a point of throwing Buster into the scenery or even out into the orchestra pit.

This act got huge laughs, but it was also a huge source of controversy, then and now. Sob-sister Keaton biographers have tried to claim that this act was thinly disguised child abuse, and at the time of the act, child-care authorities were constantly trying to accuse Joe of same.

But it has been well-documented that Buster’s stage costume had a suitcase handle sewn into the back of it, and Buster learned early on how to take a fall like a pro, so that he was never injured as a result of the act. The authorities who were concerned about Buster examined him thoroughly and never found any bruises.

Nevertheless, this early “urban legend” has survived, with fact-free observers concluding that Keaton became the “stone face” character due to his having to take years of public abuse in stride. But Keaton’s films well demonstrate that he knew how to take a fall without getting hurt. Here is just one example, from Keaton’s solo debut film One Week (1920):

What is surely most “Irish” about Keaton’s movie persona is his stoicism in the face of calamity. The world seems to constantly knock Buster about, and he seems just as constantly to take it with a shrug, as though he knows the world won’t give him an inch and yet he’s still determined to make his way in it. 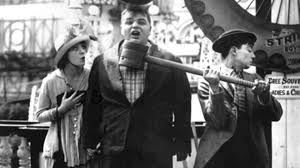 Buster began his film career in 1917 supporting Roscoe “Fatty” Arbuckle, who was one of the most popular film comedians of his time, second only to Charlie Chaplin in box-office revenues. Buster proved to be such a magnetic film presence and laugh-getter that eventually Joseph Schenck, Arbuckle’s producer, moved Keaton into Chaplin’s former studio and, from 1920 to 1928, produced short films and features co-written and -directed by Keaton that are now regarded as some of the most remarkable comedies of the silent film era.

To simply catalog some of Buster’s movie highlights is to list some of silent movies’ most famous stunts. In the aforementioned One Week, Buster and his newlywed bride try to build a do-it-yourself house that has been unknowingly sabotaged by the bride’s former boyfriend. resulting in one physical catastrophe after another.

There’s also: Buster swooping over a waterfall to save his girl in Our Hospitality (1923). Buster riding on the handlebars of a driverless motorcycle in Sherlock Jr. (1924). And Buster having a two-ton wall fall on him in Steamboat Bill Jr. (1928), escaping death only because of the wall’s open window falling down around him.

Most famously, there was his stunt-as-movie, The General (1926), in which Buster plays a Civil War train engineer from Georgia who singlehandedly fights Northern troops with his train as his only weapon. The camera in this movie seems almost as astonished as we the audience are, as it records Buster jumping off, on, over, and on top of his moving train and making it look as effortless as riding a bike. 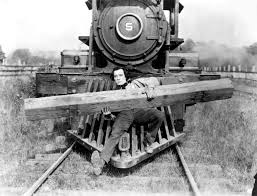 All of this was done long before CGI…and all of it was done by Keaton. Other than a high-hurdle in Keaton’s film College (1927) that was performed by an Olympic jumper, Buster did each of his stunts himself, in long shot. Keaton was achingly conscientious about performing “on the level,” demonstrating the hurdles his character went through rather than leaving them to an anonymous stunt man. (Keaton’s famous comment about why he went to all of this physical trouble himself: “Stunt men don’t get laughs.”)

Sadly, after eight years of artistic freedom, producer Schenck pulled the rug out from under Keaton. He sold Keaton’s contract to Metro-Goldywn-Mayer, where Keaton became just another contract player who had no say in the scripts or direction of his M-G-M movies.

Keaton had been known as a fairly hard drinker even before his contract was sold. When Keaton lost control over his movies, he drowned his sorrows in alcohol, to the point that M-G-M couldn’t take him anymore and fired him.

After a long period where his life spiralled out of control — his wife divorced him and changed their children’s last name from “Keaton”; he married another woman while in an alcoholic daze and later divorced her — Keaton eventually picked himself up. He returned to movies in cheap comedy shorts for Educational and Columbia Pictures. And in 1940, he married an actress and dancer named Eleanor Norris, who was 23 years younger than Keaton. Friends were certain the marriage wouldn’t stick, but it lasted until Keaton’s death in 1966. 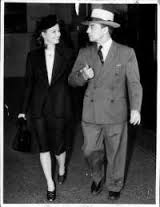 So in the end, the story of the real-life Keaton paralleled that of his screen persona. He went through a major series of hard knocks but came out on top at the end. Fortunately, Keaton lived long enough to see a “renaissance” of his silent movies, which finally got the full appreciation they deserved.

Finally, if you have any doubts about Keaton’s Irish heritage, here is a clip from Buster Keaton Rides Again, a documentary filmed a year before Keaton’s death. In particular, note Keaton’s response to a cake that is presented to him in honor of his 69th birthday.