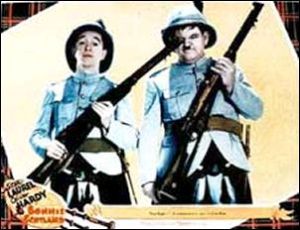 I couldn’t begin to defend Bonnie Scotland as one of Laurel & Hardy’s best-structured features. The movie takes Stan and Ollie from America to Scotland to India with all the logic of Stanley’s garbled brainpower after Ollie instructs him to “Tell me that again.” Subplots spring up and die like so much crabgrass. Worst of all is the simpy romantic plotline, with actor William Janney as a lover so whiny, even the actor himself admitted (in Randy Skretvedt’s L&H biography) as to how embarrassed he was by his own carrying-on.

(Ironically, one of the movie’s many subplots involves L&H veterans James Finlayson and Daphne Pollard as two characters ostensibly having a clandestine affair. But as soon as the movie establishes this motif and gets us in the mood for their silly romance, the subplot is yanked without further explanation. It figures — the love affair between two funny actors gets about thirty seconds of attention, while the boring romantic leads practically push Stan and Ollie out of the way in their efforts to emote.)

The story is that Ollie and Stan (known here as “Stan MacLaurel”) travel to Scotland to inherit what they believe will be a vast fortune from a Scottish grandfather whom Stan never met. Instead, they get only a stopwatch and a set of bagpipes for their trouble. For a while, they hole up in a hotel room, and their gags are so funny that one would be happy enough just to watch them in that room for the rest of the movie.

Unfortunately, they’re eventually kicked out (was there ever a hotel room where Stan and Ollie weren’t kicked out?), and in their haste to find a tailor (Stan having accidentally burned up Ollie’s pants), they mistakenly go to a Scottish army recruitment office and get signed up to fight in India. Sadly, their going to the wrong address is handled so matter-of-factly, it’s as though the scriptwriters forgot to even try to get a laugh out of it.

But then, that’s assuming that the scriptwriters can or do take their military-and-romance motif far more seriously than the viewer can, and that’s not very likely. Instead, just bear with the movie for its tedious stretches of “serious” plot, and enjoy the sight of Stan and Ollie savoring a very dramatic explanation of what a mirage is, turning a military order into a joyful dance routine worthy of Way Out West, and several other moments of wonderful comedy. It’s as though Stan and Ollie accidentally bumped into the “serious” part of the script, politely tipped their hats to it, and then proceeded to do their usual comedy in spite of the gaseous theatrics surrounding them.

Here’s the dance routine referenced above, the definitive highlight of the movie: