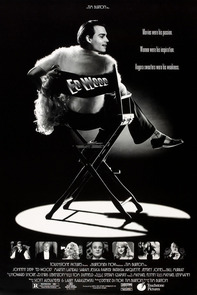 Ed Wood is easily the best film ever made about one of the worst filmmakers ever.

Edward D. Wood, Jr. is renowned in movie cults for two astounding facts: (1) he was an enthusiastic transvestite with a fondness for angora sweaters, and (2) he was so excited about being in the Hollywood aura that he never noticed how bad his own movies were.

Wood’s primary connection to Hollywood glory is with washed-up Dracula star Bela Lugosi (a deservedly Oscar-winning performance by Martin Landau). Wood convinces himself that because he uses a former star in his movies, his films are automatically great — even though one of Lugosi’s scenes involves his struggle with a fake octopus that can’t be made to move.

Other Wood actors include The Amazing Criswell (Jeffrey Jones), a psychic of no known talent. (Criswell’s monologue, which opens the film, sounds bizarre until you discover that it was paraphrased from one of Wood’s own movies.) There’s Tor Johnson (George “The Animal” Steele), a wrestler whose bulk was used to mask his total inability to take direction. Wackiest of all is Bunny Breckinridge (Bill Murray), an outrageously fey hanger-on.

Wood’s enthusiasm for filmmaking overcomes disinterested distributors, budgets that ran from shoestring to nothing, and a vast array of non-talent. His main claim to immortality is Plan 9 from Outer Space, an astoundingly bad sci-fi movie whose making is well-chronicled here.

Tim Burton, who certainly understands misfits (Beetlejuice, Edward Scissorhands), directed this potentially campy bio-flick with only the greatest affection. The black-and-white photography perfectly mirrors Wood’s era. All of the performances are crazily heartfelt. And Depp delves into another quirkily beiievable character. (Most winning of all is Vincent D’Onofrio’s cameo as Orson Welles, who gives Wood some much-needed encouragement.)

The movie ends with Wood’s triumph of Plan 9‘s premiere and before his descent into alcoholism and poverty. The real-life Wood craved any attention he could get, and no doubt he would have been thrilled at this affectionate look at his filmmaking ineptitude.