I first saw reruns of “The Honeymooners” on KPHO-TV Ch. 5 in Phoenix, AZ., in 1975, when I was 14 years old. Like millions of other Jackie Gleason fans, I’ve enjoyed the show ever since.
However, as I get older, my viewpoint of the series has done a full 180. Anyone who is versed in “The Honeymooners” usually has this take on it: Ralph Kramden is the big dreamer and schemer whose wild ideas always land with a thud. Ralph’s wife Alice is the practical one, Ralph’s anchor, who does her best to keep him grounded.
But about 15 years ago, I re-watched a “Honeymooners” episode that made me rethink the show’s entire modus operandi. In the episode “A Matter of Record,” Alice tells Ralph that her mother is stopping by. Ralph, who is always at odds with Alice’s mother, vows not to say a word to her during her visit. But he also posits that Mother won’t be there for three minutes before she starts up with Ralph, and he sets the timer on a nearby alarm clock to prove it. 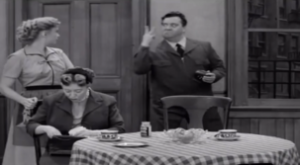 Sure enough, Mother spends most of her time taking digs at Ralph, which Alice does little to defend, and then concludes by giving away the ending to a Broadway play for which Ralph had just received free admission tickets from his boss. When the alarm clock goes off, so does Ralph, who loudly and repeatedly declares that Mother is “a blabbermouth!” Alice is so incensed by Ralph’s behavior that she angrily goes home with her mother…for good, it is implied.
The rest of the episode depicts how, two weeks later, Ralph is still without Alice and misses her terribly, and how Ralph’s pal Ed works out a plan for Ralph to win Alice back. But let’s back up for a minute. Ralph kept his part of the deal by not starting an argument with Mother, while she did everything she could to egg Ralph on. Then when he (rightfully) loses his temper, Alice goes running home to Mother.
At this point in the series, I believe it had been established that Ralph and Alice had been married for 15 years or so. Shouldn’t Alice have some sort of loyalty towards Ralph by now? What kind of wife still runs home to Mother after 15 years of marriage? And isn’t it just possible that Ralph is right every so often?
Once you start to view the series in this light, the presumed comedy starts to drain out of a lot of this sitcom’s situations. In “Better Living Through TV,” Ralph finds out about a warehouse filled with 2,000 unused can openers, which Ralph can have for $200. Ralph figures he could buy commercial time on local TV, hawk the can openers as “the household gadget of the future,” and make a huge profit. The only problem, of course, is that Ralph doesn’t have $200 or money to pay for a TV ad, and his only possible source for such money is that immovable object, Alice Kramden. 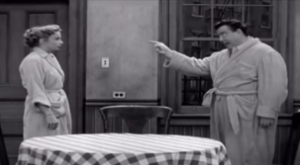 There follows a scene that gets to be almost painful to watch. In the dead of night, Alice and Ralph argue, with Ralph pleading for the money and Alice dismissing the idea as another of Ralph’s “hare-brained schemes.” I have a couple of major problems with this scene.
1)  Alice gets off cheap shot after cheap shot at Ralph. But when an annoyed Ralph declares that his first-ever hare-brained scheme was when “I asked you to marry me and you said yes,” Alice looks him dead in the eye and orders, “Don’t you ever say anything like that to me ever again, Ralph Kramden.” So it’s okay for Alice to continually badmouth Ralph, but the other way around is forbidden?
2)  Why does Alice think Ralph’s idea is so unreasonable? As has been proven for nearly 60 years since this episode first aired, countless hucksters have gotten rich hawking snake-oil products on TV with ads that were far less thought-out than Ralph’s.
The rest of the episode shows Ralph and Ed rehearsing their live TV spot (we never do find out how Ralph gets the money, it just happens), with Ralph hamming it up as a “Chef of the Future,” and then blowing the spot when the duo go on live TV and Ralph gets stage fright. We’re meant to laugh at, as Ed once put it in a different episode, “another of your well-calculated plans that went to pot.”
But is it possible that Alice might have had something to do with this plan going to pot? If the woman Ralph loves can’t be bothered to back him up (and possibly help to make the plan a success), might this be a case of self-fulfilling prophecy? 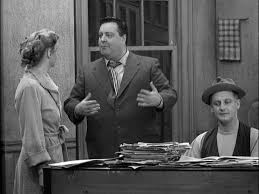 Finally, there’s “The $99,000 Answer,” where Ralph gets chosen as a quiz-show contestant, finds out that his category will be music, and spends every waking hour (and then some) of the next week boning up on every 20th-century song he can find. Again, far from encouraging Ralph to go for the big prize, Alice tells him he should settle for winning only the $600 he’ll get if he answers the first question correctly. But why? 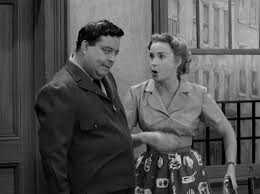 Here is my answer to all of the “why’s” in this post: Alice is a moax. Somewhere along the line, she was taught to settle for whatever crumbs life throws her way, and that’s the only goal she has in life. For all of his craziness, Ralph does dream about breaking out of poverty, and every time he gets a small chance at doing so, he examines every corner of it for a way to make it happen. It almost makes you wonder if Alice is resentful that Ralph actually does dare to dream.
And good heavens, Alice, don’t ever do anything to defend Ralph! If it’s a choice between the man you married and your curmudgeonly, cynical old mother, why, run back home to Mother every time!
I know I will be accused of digging too deep for subtext in an old sitcom. But I think that we should consider the possibility that, at least every so often, Ralph isn’t the moax of the Kramden household. Maybe it’s the blabbermouth’s daughter.