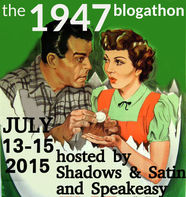 The following is my entry in The 1947 Blogathon, co-hosted by the blogs Shadows & Satin and Speakeasy on July 13-15, 2015. Click on the above banner, and read bloggers’ critiques of a variety of movies released in that year! 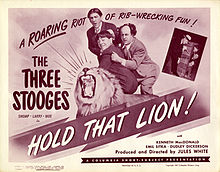 So this is a 1947 Blogathon? Eh, forty-seven, shmorty-seven! Everybody else can blog about all the prestige Hollywood productions of the year! I’m going to take a little jaunt down Poverty Row and visit…

Hold That Lion! is the 100th of 190 short subjects made by the comedy team The Three Stooges from 1934 to 1959. This short consisted of the second incarnation of the group: Moe Howard, Larry Fine, and Moe’s real-life brother Shemp (who had replaced their other brother Curly [real name Jerry] after he retired due to an incapacitating stroke). This was Shemp’s third of 76 film appearances as a Stooge. Shemp had originally worked with his brothers on-stage but had bowed out of the act 17 years earlier, returning this time only because Moe felt that The Three Stooges would be finished as an act if he hadn’t.

The movie’s main claim to fame is that it features Curly in a cameo appearance as a snoring passenger on a train. Curly had happened to drop by the set, and director Jules White thought it would be funny to use him for a short bit in the film. Thus, the movie features the only film appearance of (a) Curly with a full head of hair, (b) all three Howard brothers, and (c) all four of The Three Stooges. 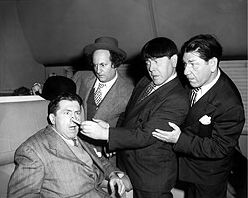 As Stooges shorts go, this one isn’t bad. It’s not an all-out laugh riot, but it’s funny enough and has good pacing and production values. It was made just before Columbia started to get all-out cheap with the Stooges shorts by shortening the running times, and using and re-using stock footage as much as possible. (In fact, Hold That Lion! was mined for stock footage for three later Stooges shorts.) 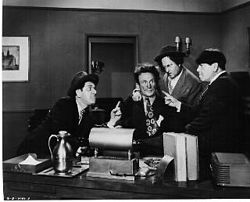 The movie’s plot, such as it is, begins with the Stooges at the office of their attorney (long-time Stooge supporting player Emil Sitka), trying to obtain a huge inheritance to which they are entitled. Unfortunately, the money is in the hands of an underhanded broker named Ichabod Slipp (Kenneth MacDonald). The attorney gives each Stooge a subpoena which they are to serve to Slipp in order to resolve the legal issue. Brilliant attorney, eh? 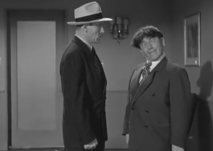 The Stooges go to Slipp’s office, but he catches on to them fast, knocks them out cold, and absconds with the money. When the Stooges come to, they discover that Slipp is escaping on a train and go after him. Most of the remainder of the film involves a lot of major (fake) fright regarding a caged lion aboard the train that the Stooges accidentally let loose.

If you’re willing to cut the movie some “oh, brother”-type slack, its only real debits are a supposed comic bit where a black porter does a stereotypical eyes-a’-poppin’-’cause-I’m-a-skeered routine when he sees the lion, and a belabored slapstick closing gag involving some eggs. (Eggs and a lion on a passenger train??) Other than that, the short is fairly funny, even if you’re not a die-hard Stooge buff.

“Enough of this popsicle stand! I’m going over to Columbia!”

Of far greater interest in some of the behind-the-scenes trivia. The lion was played by Tanner (above), who served as the on-screen mascot for Metro-Goldwyn-Mayer from 1934 to 1956. Reportedly, Shemp Howard was so terrified of Tanner that, in the scene where the Stooges first encounter Tanner in a crate, Howard insisted on a glass plate being placed between the trio and the lion. (If you look closely, you can see the Stooges’ reflection in the glass as they rush out of the crate.) However, Shemp had little to worry about; according to Emil Sitka, Tanner had gotten so sickly in his elder years that he would fall asleep in the middle of a take.