A New Leaf is the best movie W.C. Fields never made.

That is completely intended as a compliment, and it in no way belittles Walter Matthau, who delivers a fine lead performance. But there is no mistaking the spirit of Fields in Matthau, whose body language and voice inflections deliver most of the laughs that writer/director/co-star Elaine May doesn’t steal away from him.

The movie is a whimsical black comedy, if there is such a thing. Matthau plays Henry Graham, a pampered man who has depended all his life on the kindness of rich not-quite-strangers (his well-off uncle and his accountant, among others) and his trust fund for his livelihood. Henry has now run through his trust fund and the goodwill of said strangers, and in a very funny scene (one among many), his accountant (William Redfield) has to meticulously and repeatedly explain to Henry why and how he has no more money to burn through.

Having no particular skills or drive in life, Henry concludes that he must find a rich woman to marry and enable him to continue the lifestyle to which he has become accustomed. Eventually he finds the easiest of targets — heiress Henrietta Lowell (May), a nondescript botanist and teacher who practically trips over herself with her every move.

Through a rapid series of machinations, Graham takes charge of Henrietta’s life and bank account, nonchalantly planning to eventually off Henrietta and continue to live off her riches. But gradually, a funny little thing called conscience slips into Henry’s crevisses, and having never previously had such feelings — in himself, or for anyone else — he is at a loss at how to cope with it.

This was May’s writing-directing movie debut, and she never strikes a wrong note. The dialogue is crisp, and every loving shot is held just long enough to make its comic point.

May also gets wonderful performances from the entire cast, including herself. As with the heroine in her later The Heartbreak Kid, at first we seem meant to laugh derisively at mousy Henrietta and her uncouth ways. But just like the flora she catalogs, Henrietta begins to blossom under Henry’s (reluctant) tutelage.

The rest of the cast similarly blossoms under May’s direction, including Redfield, James Coco, Jack Weston, Doris Roberts, and most notably George Rose as Henry’s Jiminy Cricket of a butler. They all underplay beautifully and deliver a smashing comedy almost nonchalantly. A New Leaf was initially a box-office flop but has long since become a cult classic, its comic bloom never fading over the years.

In 1957, Arkansas radio producer Marcia Jeffries (Patricia Neal) has air time to fill. Her radio show, “A Face in the Crowd,” consists of folksy interviews with down-to-earth citizens. One day, Marcia enters a local jailhouse, where she meets Larry Rhodes (Andy Griffith), a loudmouth who has been arrested on disorderly conduct.

At first, Larry wants nothing to do with Marcia, but then he takes a good look at Marcia (who dubs Larry “‘Lonesome’ Rhodes”)  and softens up. The sheriff sweetens the deal by saying that he’ll let Lonesome loose if he’ll cooperate with Marcia. 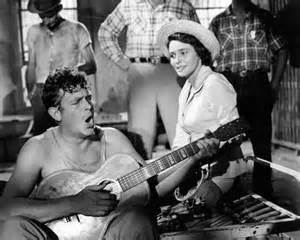 Lonesome pulls out his handy guitar and starts improvising some wild blues, and soon Marcia is satisfied that she got what she was looking for. Later, her boss is even more impressed with Lonesome and insists that Marcia track him down. In record time, Lonesome’s charisma turns him into a radio smash, with the local citizenry utterly charmed by Lonesome’s cracker-barrel wisdom. 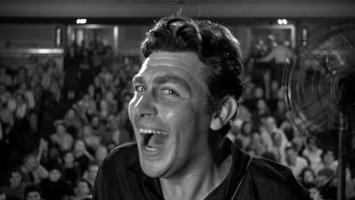 But this success ends up having some unfortunate side effects. Lonesome becomes convinced that every idea that pops out of his mouth is pure gold, and heaven help any broadcast executive who dares to suggest otherwise. And Marcia, at first bemused by this hayseed gone successful, realizes she has unloosed a genie she can’t get back in the bottle.

This movie is simply mesmerizing, not the least in the ways it predicts how Madison Avenue would mount ad campaigns that would congratulate TV viewers for being such geniuses in buying their products. The movie’s extended “Vitajex” sequence, in which Lonesome turns around the unsuccessful sales of an “energy pill,” is like a short lesson in modern advertising. The movie’s other eye-popping lesson comes when Lonesome teaches a U.S. Senator how to come across as more personable so that he can win over his TV viewers (this movie came out three years before the Kennedy/Nixon debates).

All of the movie’s performances are sharpened to a fine point. Tony Franciosa, Walter Matthau, Kay Medford, and the rest of the cast are fairly dripping with cynicism but never overplay their hands. Patricia Neal is just as sensuous and winning as she was in The Day The Earth Stood Still and (surprisingly) for similar reasons, as an Everywoman who slowly realizes she’s in over her head.

As for Andy Griffith, he’s as far from likable old Sheriff Taylor as he could get. Lonesome Rhodes is someone with just enough intelligence that, when pushed in the wrong direction, grabs everything he can for himself and leaving unhappiness in his wake. (There might be a reason that Turner Classic Movies broadcast this movie on the same date as President Donald Trump’s inauguration.)

A Face in the Crowd doesn’t quite qualify as film noir — but it’s not for lack of trying.