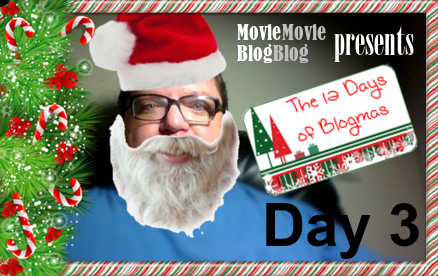 Here we are in Day 3 of my 12 Days of Blogmas, in which I “gift” movie and TV clips to some of my favorite bloggers. (Click here if you haven’t been following my scenario for the past couple of days.)

Today, I open up my bag of Christmas goodies for Lea, hostess of the delightful silent-film blog Silent-ology. Lea and I agree on so many wonderful silent films that it pains me whenever the subject of Roscoe (“Fatty”) Arbuckle comes up. As far as Lea is concerned, she might as well have been one of his adoring fans from 1920. Me, I can’t say he does much for.

But there is a single instance in which I found Arbuckle as charming as Lea does throughout his entire career. That is when he was paired, early on, with Charlie Chaplin in the 1914 Keystone comedy The Rounders. It has always amazed me that, as much as Chaplin absconded from alcohol and detested alcoholics throughout his life, he often played an alkie with balletic finesse. And here Arbuckle matches him, drink for drink. It’s a pity that this duo wasn’t pitted together more often in Chaplin’s Keystone era.

Spare 13 minutes for the joyous The Rounders, and see you tomorrow for Day 4!