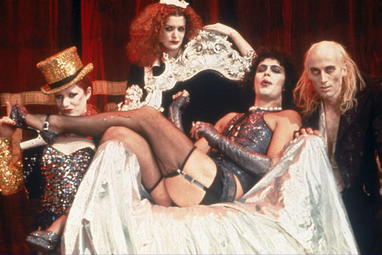 As I’ve mentioned frequently on this blog, The Rocky Horror Picture Show (1975) was a mainstay of my late-high-school and college years. In 1977, some high school friends took me to a Saturday midnight showing of the movie, and it ended up supplying most of my (limited) social life for many years afterward. (I don’t have to tell you how the movie infiltrated American pop culture long ago.)

Last night, The Florida Theatre had its annual Halloween screening of the movie. My son suddenly expressed interest in seeing the movie, so I took him to the showing. I must say, it was my least-ever-favorite screening of the film. The theater was semi-auditorium size, and we ended up with seats in the “nosebleed” balcony section. The movie was blasted out in hydro-stereophonic sound, and any shout-outs from the audience amounted to little more than white noise. But that was not my takeaway from the screening.

After we left, my son said to me, “This movie must have been outrageous when it came out in the 1970’s. They never had LGBT groups or anything like that back then.”

From the mouths of 22-year-old babes.

For decades, I had seen the movie as a raunchy but generally harmless take-off on the Frankenstein’s-monster story, with references to seemingly every sci-fi and horror film ever made. It had never occurred to me to take a really good look at the “unconventional conventionists” (the main character’s take on his onlookers). There were plain, plus-sized, African-American, wildly dressed and underdressed persons of every kind cavorting on the screen. Plus, the movie’s hero (“That’s right — the hero!” screamed the movie’s promotional poster) was a mascara-laden guy in fishnet stockings who created a new male person out of scratch, not to defy the conventions of science, but simply so that he could get laid to his heart’s content. And all of this was presented matter-of-factly, as though the movie was about Andy Hardy instead of some bisexual who couldn’t find any ordinary societal output for his passions.

In all those years, I’d seen this movie solely from my own self-obsessed viewpoint. When I first saw the movie (and for several years hence), I was a disenfranchised, socially inept nerd who had finally found a movie that I could enjoy on my own terms, unapologetically. And now I realize that the movie was saying, “There’s nothing wrong with that — but let some other disenfranchised people enjoy the show while you’re at it.”

At this point, some of you might be saying, “Well done, Captain Obvious.” But seeing the movie through my son’s eyes suddenly showed me how much it had shaped my life’s philosophy of “Live and let live.” I don’t begin to understand the lifestyles of bisexuals or transsexuals, and I don’t plan to become one, but in the end, all of it is really none of my business, any more than they should feel threatened by my heterosexuality.

In this country, there is an inordinate number of people who take it upon themselves to denigrate and threaten others who are “not like them.” Maybe they need to do some self-examination and realize that none of us are like the others. And isn’t the celebration of individuality an unspoken cornerstone of this country’s values?

For that, I’m grateful that a crazy, unassuming movie musical had the foresight to give me a little insight into a part of culture that I had never before experienced, and to say, “We’re just here to have fun. Come and join the party!”

And besides all that, The Rocky Horror Picture Show is a well-done, damn enjoyable movie. 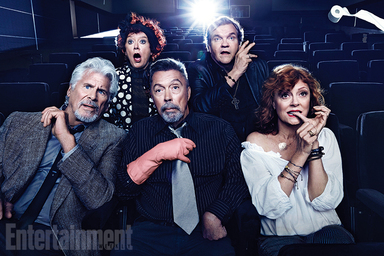 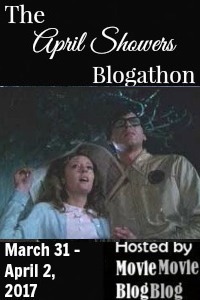 The following is the second of my two entries in The April Showers Blogathon, being hosted at this blog from March 31 to April 2, 2017. Click on the above banner, and read bloggers’ tributes to rainy scenes in cinema!

The initial appeal of The Rocky Horror Picture Show is not something easily explained; it helps if you were there at, or near, the beginning. I first saw the movie at age 16, by which time it had already been established as a midnight-movie favorite for two years. For me, at least, it was a place where the social misfits could have a weekend party of their own. I saw the movie 50-plus times throughout my high school and early college years.

It’s a terrific rock-and-roll horror movie mash-up. The main part of the story occurs after the setting shifts to a Gothic mansion, where an out-there scientist, Dr. Frank-n-Furter (Tim Curry in a bravura performance), is bringing his carefully chiseled creation, the muscular Rocky, to life. But how do we get to the mansion in the first place?

With the help of the newly engaged and deeply naive Brad Majors (Barry Bostwick) and Janet Weiss (Susan Sarandon), that’s how. They’re on their way to visit a former teacher and tell him about their engagement. But in the midst of their rain-soaked journey, a tire on Brad’s car blows out. When Brad contemplates going out for help, Janet asks, “Where will you go in the middle of nowhere?” And as the knowing movie audience yells out, “What’s white and sells hamburgers?”, Brad strokes his chin and recalls, “Didn’t we pass a castle back down the road?” 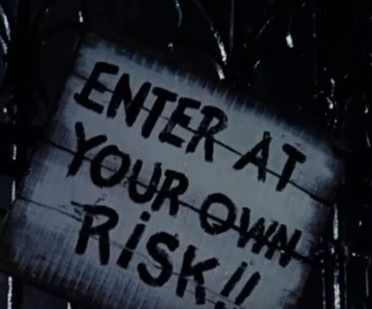 But they do it anyway, while singing a cheery song about how the light from the castle sprung up from the darkness to save them. If they only knew what was on the other side of that castle fence… 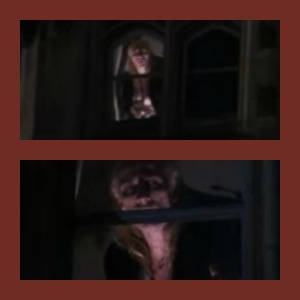 So rain is a definite trigger of portent to come in this movie. (It also briefly figures later in the movie, when a frightened Rocky breaks out of the castle and tries to escape.) Indeed, wetness abounds in this film, in other ways that I won’t tastelessly disclose here.

The musical number is embedded below. (If you liked this blogathon entry, click here to read my first one.)