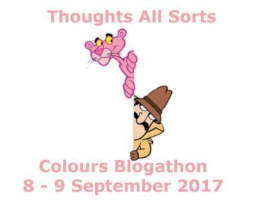 The following is my entry in The Colours Blogathon, being hosted at the blog Thoughts All Sorts on Sept. 8 and 9, 2017. Click on the above banner, and read bloggers’ reviews of movies with very colorful titles and themes! 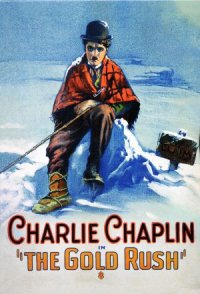 There’s not much praise that hasn’t already been bandied about for The Gold Rush, but I’ll add my two cents’ worth anyway.

If you want to introduce Charlie Chaplin to someone who has never seen his work, this one has it all. There’s, of course, Chaplin’s Tramp (here dubbed “The Lone Prospector,” trying to survive during gold- and cold-strikes in Alaska); a lovely heroine (Georgia [Georgia Hale], a dance-hall girl with whom Charlie becomes smitten), and villains big (Black Larsen [Tom Murray], one of those great, wordless silent-movie villains who exists just to be mean), medium (Jack [Malcolm Waite], who thinks he deserves Georgia more than Charlie does), and small, at least threat-wise (Big Jim McKay [the wonderful Mack Swain], who starts out tolerating Charlie and then takes him to heart). 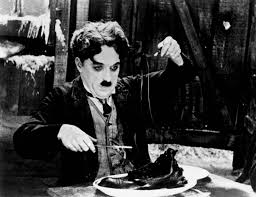 The movie also has set pieces that are now silent-film folklore (the boiling of the shoe in lieu of a Thanksgiving turkey, Charlie entertaining his guests with a “roll” dance) and a roll-call of memorable gags (gotta love Chaplin doing the chicken). And the pathos is perfect here, never done to excess (Who couldn’t feel for Charlie, all alone on New Year’s Eve when Georgia had half-heartedly promised she’d visit him?). 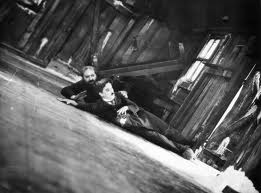 Countless critics have complained about Chaplin’s cheapness, how he often spared a buck to do a realistic special effect. Have you ever noticed that nobody complains about cheapness for The Gold Rush? There’s probably little of this movie that couldn’t be done just as effectively on stage as a play. But when Charlie and Big Jim are about to go over the cliff inside their cabin in the movie’s climax, I don’t care if that cabin is a model or not, you feel every inch of that potential fall. (My favorite moment in the entire movie is when Big Jim, having made his way safely out of the tottering cabin and found his lost gold stake, suddenly breaks out of his reverie when Charlie yells for help. Cut to a wide-eyed Charlie, beckoning a single finger to Big Jim, as if he was just asking for help cleaning up the cabin.)

Some movies go straight past the logical side of your brain and head for that primal spot where the kid in you still resides and responds. When such a movie fails or goes over-the-top, you find yourself embarrassed to look at the screen; when the movie is operating on all cylinders, it’s something like The Gold Rush.