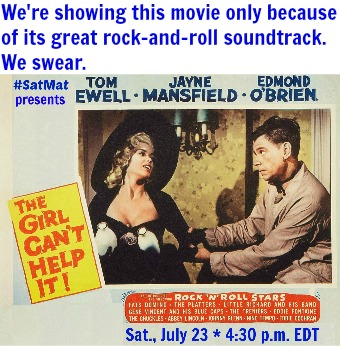 No less than The Beatles described this raucous comedy as an influence on their own style. (Paul McCartney does a brief but superb critique of the movie in Chapter 1 of The Beatles Anthology video.) Among other treasures, this one boasts director Frank Tashlin’s famous cartoon-like gags (he began as a director of Warner Bros. cartoons), Little Richard and other great rock-and-rollers of the time… and, oh yes, Jayne Mansfield. If that isn’t enough to grab you, a synopsis of the plot won’t help, but I’ll try:

Do we have your attention?

Jayne Mansfield is the moll of a gangster (Edmond O’Brien) who gets her a milquetoast agent (Tom Ewell, who played a similar patsy to Marilyn Monroe in The Seven Year Itch) and, of course, eventually gets less than professional with him. The opening gag, where Tashlin makes elaborate fun of the wide-screen CinemaScope process, doesn’t play quite as well on your computer screen but is still a hoot. Then there’s Jayne Mansfield (and darned lots of her) who, if she didn’t pose a threat to Marilyn Monroe, at least passes for more of a thespian than her latter-day supermodel counterparts.

So join us this Saturday on Twitter.com at 4:30 p.m. EDT, and enjoy Jayne’s (and this movie’s) considerable charms!