The following is my entry in this blog’s 3rd Annual SEX! (now that I have your attention) Blogathon, being hosted here from June 16-18, 2017. Click on the above banner, and read bloggers’ takes on movies that subtly suggest sex rather than blatantly depict it! 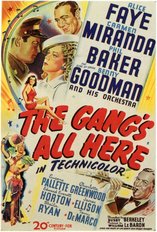 Is that a banana dance line, or are you just happy to see me?

About 20 minutes into the movie, a towering hat of Technicolor fruit appears on the screen, followed by its owner — ’40s “Brazilian bombshell” Carmen Miranda. She proceeds to do a number called “The Lady in the Tutti-Frutti Hat,” accompanied by chorus girls who bear bananas. Six-foot-tall bananas that continuously droop and sprout until number’s end, when the chorus girls, worn out by the burden of this mutated fruit, lay down for a long siesta on a stage dressed up like an island.

There’s a reason this number occurs so early on: It takes you the rest of the movie to convince yourself you actually saw this in a 1943 movie.

But then, this is from Busby Berkeley, a director who staged his musical numbers as though he was declaring war. And next to kitsch, war is pretty much the motivator here.

The wafer-thin story involves Andy (James Ellison), a soldier who woos and wins Edie (Alice Faye), a canteen dancer, the night before Andy goes off to World War Two. In what seems an instant, Andy gets decorated and returned home to a victory party thrown by the family of Andy’s childhood sweetheart and fiancee — who, unfortunately for Edie, is not Edie.

Will the heartbreak be resolved? Do you really care? The plot is mostly an excuse for some snappy repartee between major ’40s stars (in particular, Eugene Pallette and Edward Everett Horton are hilarious), and the kind of musical numbers that seem to drop out of thin air. (In a couple of scenes, Benny Goodman and his orchestra stroll by and do some songs just for the heck of it.)

The Gang’s All Here is really a 1943 time capsule, but an eye-popping rouser of one. They don’t make ’em like this anymore. They didn’t make ’em much like this back then, either.