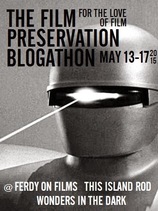 The following is my contribution to the fourth annual For the Love of Film: The Film Preservation Blogathon, being hosted May 13-17, 2015 by the blogs Ferdy on Films, This Island Rod, and Wonders in the Dark. Click on the above banner, and read bloggers’ takes on a variety of film classics!

A slight pause here for a word from our sponsor…

The purpose of this blogathon is to raise money to help preserve our film heritage for future generations. Therefore, it is at this point that we ask you to click on the button below and…

We now return you to our regularly scheduled blog.

As any Laurel & Hardy buff will tell you, Hats Off is one of the most frustratingly long-lost pieces of the L&H puzzle. It and The Rogue Song remain the only missing L&H films (and even a few scraps of Rogue Song have turned up over the years). It’s doubly frustrating because its premise provides the obvious basis for the L&H Oscar-winning sound short The Music Box. (In Hats Off, L&H are moving a clothes washer instead of a piano, but most other story elements in the two movies are parallel, right down to the endless hill of stairs [which still exists in Los Angeles].) And so many other elements fundamental to L&H comedy — The Never-Ending Hat Routine, not to mention Anita Garvin and James Finlayson — are present here.

From YouTube, here is a very interesting “reconstruction” of the movie, based on the movie’s stills and working script:

Before I leave, please allow me one more comment about Laurel & Hardy and their “connection” with the ethereal world of film preservation.

At any number of online sources (including www.filmpreservation.org), you can find a staggering number of statistics about how many American films have been lost due to lack of preservation. But where Laurel & Hardy are concerned, did you know that the Hal Roach Studios — the company that brought about Laurel & Hardy’s classic comedy films in the first place — nearly aided in the loss of said classics?

If you didn’t know that, I highly urge you to visit the official Laurel & Hardy website here, and read the astounding story of how much of L&H’s filmography was nearly left to wither and die in the desert. If that doesn’t make you want to contribute to this blogathon, I don’t know what else will!