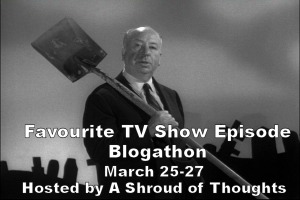 The following is my entry in the second annual Favourite TV Episode Blogathon, hosted by A Shroud of Thoughts from Mar. 25-27, 2016. Click on the above banner, and read bloggers’ critiques of their favorite single episodes of TV series!

(The following blog entry is SPOILER City. If you are interested in the episode described herein, you are best advised to scroll to the very bottom of this blog entry, where the episode is embedded and you can watch it before reading further.)

Back in my day (the old codger said), unless your TV show was a classic like “The Honeymooners” or beloved like “Leave It to Beaver,” once it ran its initial course, you never saw it again. Now, thanks to YouTube and countless other social media outlets, you can find old TV series you never even knew existed. That’s how I came across my entry for this year’s Favourite TV Episode Blogathon. 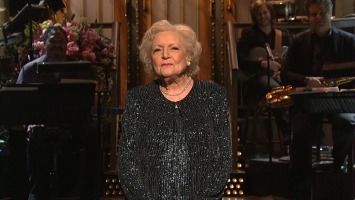 “Date with the Angels” was a mid-season replacement that apparently did not win over America with its charms; it lasted for only 33 episodes, from May 1957 through January 1958. It starred White and Bill Williams (I know — who?) as (to quote Wikipedia) “newly married Vickie Angel and her insurance-salesman husband Gus Angel, who get themselves and their friends and neighbors into various comedic situations.” White later said, “I can honestly say that was the only time I have ever wanted to get out of a show.”

(If you examine the credits, you’ll see that its crew met greater success a couple of years later with “My Three Sons”: creator Don Fedderson, writer George Tibbles, and composer Frank DeVol. )

Yet the series did at least one episode that’s worthy of mention. That was their Christmas episode, “Santa’s Helper,” which aired on Dec. 13, 1957. The episode might not have seemed like much at the time, but it now boasts a treasure trove of appearances by later-famous TV supporting actors. Plus, preceding as it did an era in which sitcoms were content to rip off A Christmas Carol or It’s a Wonderful Life for their Christmas segments, this episode comes off as surprisingly original and funny. 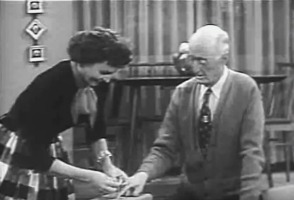 The story’s centerpiece is actually Mr. Finley, played by very familiar character actor Burt Mustin (above right; 1884-1977, who looked just as old then as when he guested on “All in the Family” in the mid-1970’s). Mr. Finley is Vickie Angel’s elderly neighbor, and he is helping Vickie trim her Christmas tree, mainly because the only other thing he has to occupy himself is fixing dinner for his persnickety bachelor son Roger. Unfortunately, Vickie is running out of ways to keep Mr. Finley busy, and once Vickie’s husband Bill gets home, she’d rather do things with him (no, not those things — this is 1957 TV, remember). 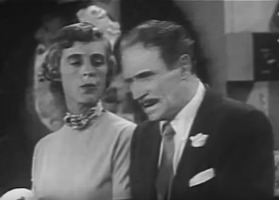 Vickie calls Dolly Cates, a friend of hers who works at a local department store. (Dolly is played by Nancy Kulp, who has, refreshingly, a sharper tongue here than she does as bachelorette secretary Miss Hathaway on the later “The Beverly Hillbillies.”) Vickie asks Dolly if there might be a job opening for Mr. Finley at her store. As it turns out, Dolly’s boss, skinflint Mr. Wallace (Hanley Stafford), is looking for a jolly store-Santa who will help to hawk their toy inventory and boost sales. 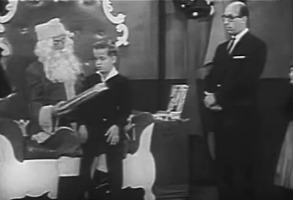 Mr. Finley takes the job and turns out to be a smash as Santa, but it comes at a price. First, his son Roger comes skulking to the store, wondering why his pop isn’t available to fix supper anymore. (Roger is played by Richard Deacon [above right], later to gain fame on “The Dick Van Dyke Show,” and a more persnickety bachelor type you couldn’t find anywhere.)

Second and worse is Mr. Finley’s consequences for the store. At first, Mr. Wallace is delighted to have to order extra toys for the store; he thinks the merchandise is flying off the shelves. But eventually, he discovers that the only reason the toys are going so fast is that “Santa” (Mr. Finley) is giving a toy to each child who visits with him!

Naturally, the inevitable happens: Roger turns his back on his dad, Mr. Wallace has Mr. Finley arrested for grand theft, and Mr. Finley is sentenced to 25 years of hard labor.

Oh, who are we kidding? This is a sitcom — the only place where stuff like that happened on 1957 TV was “The Twilight Zone.” Roger is ready to drag Mr. Finley back home, but when he sees how well the kids at the store are getting along with his dad, he reluctantly acquiesces and skulks back home, forced to make his own supper. Mr. Wallace does indeed consider calling in the law, but instead he calls the toy company and arranges to pay for all of the toys that Mr. Finley gave away. 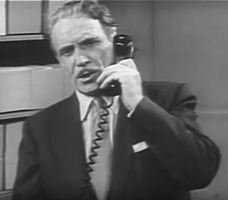 Betty White may have been right to complain about the routine quality of her TV series (I confess to never having seen any other episodes). But for this episode alone, “Date with the Angels” stands out for actually providing an original twist on Christmas themes. The entire episode is embedded below for you to watch.