READERS: Please forgive me this period piece. I wrote this for a local newspaper 13 years ago, when the reality series “The Apprentice” was in its heyday. I can’t resist posting it as a historical document. 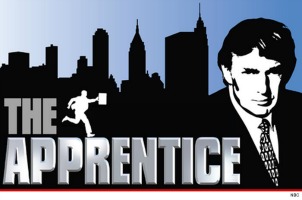 Each week, New York building mogul Donald Trump gives two (rapidly deteriorating) teams an enterprising scheme — e.g., pitch a new brand of bottled water. The team that earns the most money gets a week’s stay of execution. The losing team gets to meet with Trump in — cue music sting — the boardroom.

The boardroom is where the real sales job comes in. Trump grills the losing team members on why they didn’t succeed. And with few exceptions, each member does his or her best to point out why some other team member was at fault. The team member with the worst excuses gets to hear Trump intone in New York-ese, “Ya fahd!” (translated as, “You’re fired!”).

Then there’s the payoff. At series’ end, the final person left standing will work for Trump for one year, at an annual salary of $250,000. So the prize is…more kissing-up to Trump? For only a quarter-mil? Isn’t that, like, cigarette money in New York?

The most interesting players are, of course, the most manipulative. Thus far, that includes the ousted Omarosa (a passive-aggressor who used a slight bump on the head to get out of two whole episodes of work) and Troy (who lures people in with his country-bumpkin routine before going in for the kill).

As with “Survivor” — the other reality-TV gem from “Apprentice” creator Mark Burnett — “The Apprentice” is guilty-pleasure heaven. Unlike most reality shows that either trade on fading celebrities or degrade decent folk, this show has perfect pitch.

Viewers can easily identify with someone having to survive on his wits, either on a desert island or Manhattan Island. At the same time, you don’t feel terribly sorry to see these people get dumped on, because every one of them proves they had no scruples to begin with.

So when you think you’ve had the occasional bad day of toadying to your boss, go home and watch “The Apprentice,” where toadying is a job prerequisite.