The following is my entry in this (my) blog’s 2nd Annual SEX! (now that I have your attention) Blogathon, being hosted here from June 19-21, 2016. Click on the above banner, and read bloggers’ critiques of movies that subtly suggest sexuality rather than graphically depicting it!

(The following blog entry is dedicated to former USA TODAY film critic Mike Clark — who, one day when he tried to switch the TV channel from a showing of Jane Russell’s The French Line, was chastized by his crying two-year-old son, who told him, “I want to see the big lady!”) 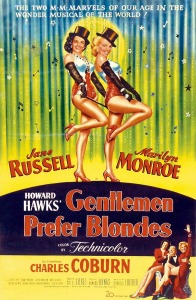 I am married to a newspaper publisher and editor, so I’d be a fool not to believe that women are the equal of, and in many ways far superior to, their male counterparts. What I don’t believe is that women can’t be feminist and sexy at the same time.

Unfortunately, women are so often forced to loudly confirm my first statement (in order to shout over the yahoos who try to drown them out) that the second statement gets lost in the confusion. But I think that director Howard Hawks — whose filmography is filled with bold, assertive women (see His Girl Friday and Ball of Fire) — was trying to make this point, however subtextually, when he directed my all-time favorite movie musical, Gentlemen Prefer Blondes.

The movie stars Marilyn Monroe and Jane Russell as Lorelei Lee and Dorothy Shaw, two American showgirls en route to France. The story makes it abundantly clear that these women want what they want, with no apologies, and each is given her own musical number to spell it out.

Dorothy is attracted to brawny, ripply men, and she lusts over acres of them in the hilarious “Ain’t There Anyone Here for Love?” (Naive moviegoer that I am, it took me years of sexual politicism to realize that there might be a reason why this roomful of muscle-bound males never give a second glance to buxom Dorothy.)

Lorelei adores anything with a dollar sign attached to it, particularly diamonds, and she makes this feeling explicit in the iconic “Diamonds Are a Girl’s Best Friend.” Luckily, Lorelei happens to be engaged to Gus (Tommy Noonan), a rich, milquetoast man who is only too happy to appease her. Unfortunately, Gus’ father completely distrusts Lorelei and hires Ernie Malone (Elliott Reid), a private detective, to tail Lorelei on her cruise to France. Too bad Ernie has a thing for women who look like Jane Russell.

At this point, I must make a full confession: I am not gaga over Marilyn Monroe as most red-blooded American males are. I can easily see why she became a star and the fantasy figure for so many people, but for me, she just sells “it” a little too hard. However, she does win me over for, at least, the duration of this movie. If you doubt the movie’s support of feminism, listen to Lorelei’s beautiful speech to Gus’ father near movie’s end — where basically, she upends the viewpoint of male chauvinists by saying, If you guys can have it both ways, why can’t we women have it, too?

Nevertheless, my heart — and let’s face it, my hormones — go out to Jane Russell. She is thoroughly winning as Dorothy — strong, brassy, and yet willing to let her heart melt when the right guy comes along. And for a woman who spent a large part of her autobiography apologizing for the skin she displayed in The Outlaw and The French Line, she has zero qualms about showing off her absolutely bitchin’ bod here — particularly in a short reprise of Marilyn’s “Diamonds” number that, for me at least, has it all over the original. 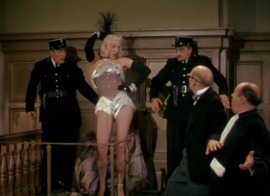 Wouldn’t the world be a whole lot better off if each gender admitted to and embraced its weaknesses and strengths? One wonders how many moviegoers, if any, caught the feminist broadside of this smashing musical when it was first released in 1953. Six decades later, it’s still a message worth taking in, even if you have to root around in the subtext to find it.