The Adventure of Sherlock Holmes’ Smarter Brother and The World’s Greatest Lover were Gene Wilder’s writing-directing award from Twentieth Century-Fox for having collaborated with Mel Brooks on Fox’s hit comedy Young Frankenstein. Unfortunately, both movies suffer from the same malady: They want very badly to be Mel Brooks movies. (Brother even has a cameo appearance from Brooks, albeit in voice only.) 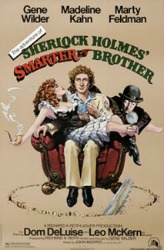 Brother provides a self-explanatory title. Wilder plays Sigerson Holmes, the brilliant but highly neurotic brother of the famed detective. Sherlock decides to pass one of his cases on to the much-overlooked Sigerson to resolve. It happens to be a case in which the entire country of Britain hangs in the balance. Sigerson is aided by Scotland Yard records clerk Orville Sacker (Marty Feldman) and music-hall singer Jenny Hill (Madeline Kahn).

There are two primary problems with this movie. The first problem is that we never get a sense of Sigerson as a real character. When Sacker first encounters Sigerson and asks him if he has a brother named Sherlock, Sigerson haughtily replies that his brother’s name should be properly pronounced as “Sheer Luck.” This gets us anticipating a rich plot about Sigerson’s trying to overcome his past (just as Dr. “Fronkensteen” did in Young Frankenstein).

Unfortunately, the sibling-rivalry element pretty much ends right there. If the movie didn’t keep hammering the point home, we’d never know that Sigerson is related in any way to Sherlock.

That’s because the movie keeps going off on crazy tangents. In fact, nearly every character in the movie is crazy (or at least acts that way), even Sherlock’s famed archenemy Prof. Moriarty (Leo McKern). From the very first scene, nobody has a normal reaction to any unusual situation — it’s all pitched at Mel Brooks gaga-shtick level. So you don’t feel that you really have a stake in any of the characters. As a result, a number of elaborate set-pieces — and the movie is extremely well-mounted, with great period detail — all add up to nothing but frantic activity.

It’s not for lack of trying. Feldman, Kahn, Dom DeLuise, McKern, and Roy Kinnear (McKern’s co-star in The Beatles’ Help!) give it their all, but they’re only halfway successful. Yet of the two movies, at least Brother is more good-natured and tolerable than… 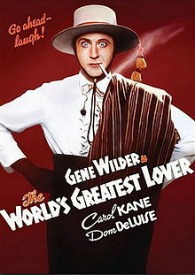 The World’s Greatest Lover appears to have been Wilder’s effort to prove that he was another Charlie Chaplin, in both slapstick (some painfully forced physical comedy at the movie’s start) and pathos (the movie takes its last half-hour most seriously after the labored farce of its first 60 minutes).

The movie is set in the silent-film era and concerns a movie studio that is trying to find a successful counterpart to rival Paramount’s Rudolph Valentino. The studio runs an ad telling men all over the country that they can come to Hollywood to audition for the role of “The World’s Greatest Lover.” One of the auditioners is Rudy Hickman (Wilder), an inept baker from Milwaukee.

The movie might have been fairly funny if its story had been presented at face value. But from the get-go, Wilder and most of the cast mug shamelessly and do everything they can to convince us that they’re hilarious, rather than just letting the story roll out on its own.

About the only grace notes are supplied by Carol Kane as Annie, Rudy’s timid and long-suffering wife. Kane is the one person in the movie who doesn’t oversell the comedy. And you end up feeling a lot of sympathy for Annie (probably more than Wilder intended) because Rudy is such a hyperactive, bullying, sex-crazed wacko that you wonder how Annie has ever put up with him.

Unlike Smarter Brother (which at least had a milder tone), everything here is pitched to the rafters — at least until Wilder tries for pathos in the film’s last third. But, as happened so often with Jerry Lewis in his heyday, the movie has been done in such a comic-book style that its pathos is unearned.

Surprisingly, both of these movies were modest successes on their first release, but with only a couple of exceptions in the following decade (The Woman in Red and the disastrous Haunted Honeymoon), these movies pretty much ended Wilder’s turn as an auteur.

Four decades later, movie buffs are still praising Wilder’s writing and acting in Young Frankenstein, and with good reason. You’ll notice that even YF fans aren’t exactly clamoring for a revival of either The Adventure of Sherlock Holmes’ Smarter Brother or The World’s Greatest Lover — and there’s a reason for that, too.

(Nevertheless, I’ve embedded both movies below, mainly because they’re available for free on YouTube. If you can make it very far through either movie, look for the surprise cameos: Albert Finney and the aforementioned Brooks in Brother, and an early walk-on for Danny DeVito in Lover.)

Last night, I took my 20-year-old son to a theatrical screening of Blazing Saddles; he’d never seen it before. My wife had actually recorded the movie on our TV, but my son (God bless him) insisted that his first viewing of the movie be in an actual theater. (In case you’re wondering, he loved it, and on the way home, he used his phone to re-view clips from the movie on YouTube.)

I’m too lazy to write an actual review today. Plus, there are legendary movies, such as this one, that have had so much written about them, I’m loathe to think I can add anything fresh to the critical summary. (I think the first two Godfather movies are two of the best American films ever made, which is why I’ve always balked at reviewing them.)

But at the end of the day’s sunset, Blazing Saddles still holds up as a superbly lunatic film. It tosses so much craziness at you that you’re still laughing at its best gags even while some weaker gags are popping up on the screen. If it can truly be considered a Western, it’s one of my favorites.