We had a slew of bloggers who couldn’t wait to write about the apocalypse — at least, as it is depicted in movies. See what they had to say as we present

Click on the name of each individual blog below to read their blogathon entry.

Diary of a Movie Maniac reaches way back to another country and another era for his end story — the Danish silent film The End of the World.

Caftan Woman decided to consult a Pal (George, that is) to find out what would happen When Worlds Collide.

Speakeasy offers a double feature of doom with This Is Not a Test and Five.

Fate brings the hammer down on Mike Hammer in the apocalyptic film noir Kiss Me Deadly, as reviewed by The Dream Book Blog. 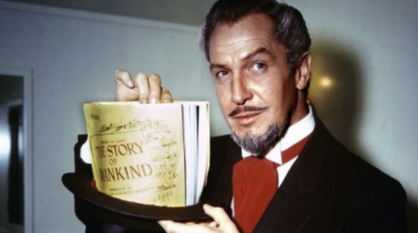 Seeker of Truth ponders whether humans should be allowed to survive, based on the evidence provided in The Story of Mankind.

In the first of two entries from our co-host The Midnite Drive-In, nuclear (and dysfunctional relationship) fallout is inevitable in Stanley Kramer’s On the Beach.

Maddielovesherclassicfilms observes the effect that an incoming meteor has on the world and its inhabitants in Deep Impact.

Movierob gives his take on I Am Legend, the first of two entries in his apocalyptic annals.

The sun is dying, so ThoughtsAllSorts tries to grab a little Sunshine for us.

And finally, yours truly takes a look at the cheesier side of apocalyptic cinema, as shown in Plan 9 from Outer Space and the film-within-a-film of Strange Brew.

We still have two more days of the blogathon to, er, survive, so keep us bookmarked for more ominous fun — we’re not dead yet!