The following is my entry in the Beyond the Cover Blogathon, being hosted by the blogs Now Voyaging and Speakeasy from Apr. 8-10, 2016. Click on the above banner, and read bloggers’ takes on novels adapted into movies!

In Mystic River, a man confesses to a murder and says that when he committed it, he felt God looking down upon him in resignation, as you would look at a puppy who made a mess on your rug.

Thanks to the keen directorial eye of Clint Eastwood, his movie of Dennis Lehane’s novel has the same effect — as though God is looking down on a neighborhood of self-haters who won’t give Him or themselves a break.

The most notable member of this neighborhood is David, a boy who was lured into a car by two child molesters who posed as cops. David is embodied as an adult by Tim Robbins, who shows us that David, now a husband and father, is still inhabited by that little boy. The high-pitched voice, the overeagerness to please whomever he’s talking to, the slumped shoulders, all tell us what David says in a perfect line of dialogue — whoever escaped from his abductors’ basement after four days, left behind that little boy when he emerged. 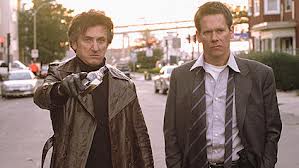 David had two friends who weren’t lured into that car, but they don’t seem any happier as adults than David does. Jimmy (Sean Penn) is a reformed crook who still rules the neighborhood, but he seems puny even before he gets the news that his young daughter has been murdered. The other friend, Sean (Kevin Bacon), is a cop who has escaped the neighborhood and dreads returning to it to investigate the daughter’s death.

There isn’t a person in this movie who doesn’t seem fully realized. Never mind Robbins, Penn, Bacon, Laurence Fishburne, Marcia Gay Harden, Laura Linney, and every other major actor in the movie. Just assume that they’re great. Look at a character like the funeral home attendant. He mechanically goes through a list of funeral procedures with Jimmy, until Jimmy says he wants to see his late daughter, who’s in their morgue. The guy looks as though he doesn’t know how to handle a request that isn’t covered in his rule book. Every character has little details like that, making the whole movie feel lived in.

And everything that was so poor in Eastwood’s previous movie, Blood Work, is perfect here. In particular, there’s a climactic cross-cutting scene that I’d compare to The Godfather — not nearly as melodramatic, but just as effective. I’m not a fan of Eastwood’s movie work overall, but Mystic River is certainly one of his highlights from an excellent set of ’00s movies.