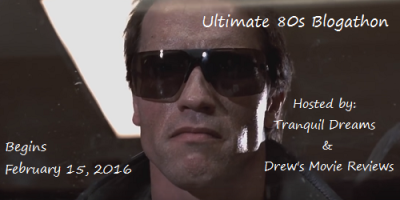 The following is my entry in the Ultimate 80s Blogathon, being hosted Feb. 15, 2016 by the blogs Tranquil Dreams and Drew’s Movie Reviews. Click on the above banner to read reviews of bloggers’ favorite films from the 1980s! 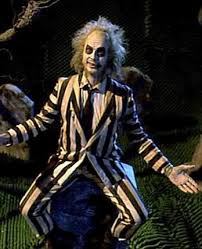 When Beetlejuice first released in 1988, a friend of mine spent his entire lunch hour explaining the plot to me. I couldn’t imagine anyone being enamored of such a bizarre-sounding comedy. I saw it a year later on cable TV, and it has become synonymous with Halloween for me ever since. Besides which, it’s as riotously funny as any movie I’ve ever seen.

Strangely enough, it didn’t start out that way. Director Tim Burton, fresh from his success with Pee-Wee’s Big Adventure, originally planned the movie as a macabre drama about a sweet couple named Adam and Barbara Maitland (played straight, and to perfection, by Alec Baldwin and Geena Davis). The Maitlands accidentally die in a car crash, and the movie was supposed to be a ghoulish look at the deceased couple’s coping with the afterlife.

Then Michael Keaton signed on to play the title role of a ghostly “bio-exorcist” who helps the Maitlands cut through Death’s red tape (but only to help himself in the end). Keaton uncovered the movie’s black-comedy potential and turned around Burton’s vision of the movie.

And what a turn-around! Keaton’s role takes up only one-fifth of the movie, but when he appears, it’s like all the Marx Brothers set loose in one ghostly spirit. Lascivious, vociferous, and hilarious, Keaton made comedy history and won the National Society of Film Critics’ best-actor nod.

The supporting actors are no slouches, either. Winona Ryder as a death-obsessed girl who is surprised by her encounter with the real thing, Jeffrey Jones as her smug dad, and most of all, Sylvia Sidney as a beleaguered afterlife clerk…all are wonderful.

The music is one of cinema’s great scores, courtesy of the offbeat Danny Elfman — with a huge assist from Harry Belafonte’s “Banana Boat Song” (in the funniest lip-synch routine ever put on film, posted below). And when the movie isn’t all-out funny, which is seldom, it’s a marvel to look at, thanks to production designer Bo Welch.

If you want to do Halloween right, forget all those cutesy, just-kidding cartoons floating around TV in October. Beetlejuice is the real deal.