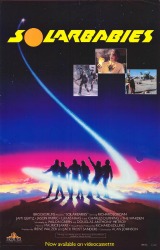 If you haven’t heard of Solarbabies, I won’t hold it against you. It was a strange-sounding apocalyptic sci-fi movie that came out in 1986 and sank without a trace. (I had no interest in seeing it at the time and never have since then.)

The funny thing is that it had all the elements of a hit. It had a notable cast of veteran and upcoming stars including Charles Durning, Lukas Haas, Jami Gertz, and Jason Patric. And it came from the production company of, of all people, Mel Brooks.

A man named Paul Scheer runs a podcast named “How Did This Get Made?” whose subject matter is movies that are so out-there, they make you ask the titular question. Scheer and an associate made it their goal to personally ask that question of Mel Brooks and Solarbabies, and the result is a delightful interview with Brooks, the link for which is embedded below.

The only annoying part of this podcast episode is its first few minutes, wherein the hosts endlessly slap themselves on the back for scoring Brooks as a guest. But as you can imagine, when Brooks-the-storyteller gets going on the making of the movie, there’s no stopping him. Enjoy!