Joan Collins plays a real-estate hustler who drags tourists to the outskirts of Florida to sell them swamp land in the mistaken belief that it’s soon to be a major community resort. Doesn’t a woman like that deserve to be overtaken by mutated ants, even if she is Joan Collins? Maybe because she’s Joan Collins??

The movie’s credits make much of the fact that its story is based on a novel by H.G. Wells, though I doubt that Wells had much to say about either real-estate scams or radioactive waste. But don’t worry, it’s a standard ’70s disaster movie (writ small due to the lack of funding from a major studio). We get the requisite exposition from one-dimensional characters before they get turned into so much ant fodder. And as for Joan…well, the “Dynasty” pilot script must have looked like manna from heaven after starring in this mess! 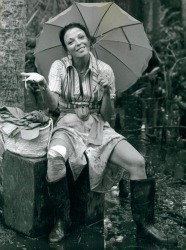 So bring your calamine lotion, and get ready to rock with the #SatMat crowd at Twitter.com this Saturday at 4:30 p.m. EST!