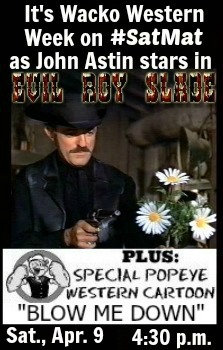 There are plenty of theatrical movies that have attained cult status, but many TV-movies have. This is one of them. Evil Roy Slade stars “The Addams Family’s” John Astin as the title character, a typical low-down Western villain who makes an honest (so to speak) effort to change his way after a run-in with a cute local schoolmarm (Pamela Austin).

It’s not quite up in Blazing Saddles comedy territory (it was broadcast about a year before Mel Brooks’ mock-oater), but it’s not for lack of trying. It was written by TV wunderkind Garry Marshall while he was still doing the TV version of “The Odd Couple” (and a couple of years before he hit it big with “Happy Days”), and it carries some “Odd Couple” personnel with it (director Jerry Paris, co-writer Jerry Belson, and Garry’s sister Penny in a small role), so it certainly has its comedy chops. And John Astin going whole hog on anything is a good enough reason for me to watch a comedy.

In keeping with the Western theme, I will preface the movie with a vintage Popeye cartoon, Blow Me Down! (1933) in which Popeye enters a small Mexican town where Bluto is holding forth as local bandito. So saddle up, partner, and join us at #SatMat for a lively Live Tweet on Twitter.com this Saturday at 4:30 p.m. EDT.