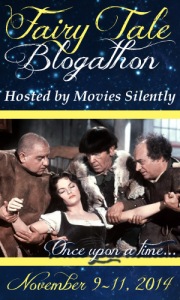 The following is my entry in the Fairy Tale Blogathon, hosted by Movies Silently from Nov. 9 through 11. Go to http://moviessilently.com and read enjoyable critiques of movie versions of classic fairy tale stories! 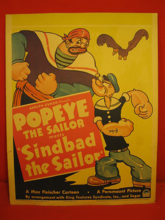 One of the nicest memories of my marriage has been taking my wife, ordinarily not a cartoon fan, to see the Disney cartoon Beauty and the Beast when it was first released in 1991. Within five minutes, she had her arms clasped across the seat in front of her, staring starry-eyed at the screen. She later told me that the movie made her feel like a kid again.

I got the same effect watching Popeye the Sailor Meets Sindbad the Sailor. It looks and plays like a children’s storybook come to life.

That’s not to say it at all sacrifices the characterizations we’ve loved up to this point. Popeye is still blustery but well-meaning, Olive Oyl is in her finest damsel-in-distress mode, Wimpy remains single-minded in his pursuit of food, and Bluto, is…well, he’s still Bluto, if not by name.

Here, Bluto serves as the titular villain, Sindbad the Sailor. He is afraid of nothing and nobody, and he introduces himself with an elaborate song in which he claims he “doesn’t like to brag” and then has a fine time doing so. 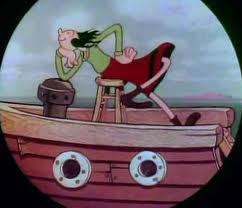 Into Sindbad’s milieu sail Popeye, Olive, and Wimpy, and Sindbad catches sight of them in his telescope, which has the remarkable ability to zoom in on a close-up of Olive Oyl’s legs (if that’s your idea of a good time). Sindbad sends one of his island’s domesticated monsters, a huge bird, to destroy Popeye’s ship and capture Olive for Sindbad. 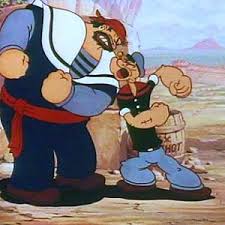 You can easily guess which sailor is going to win this whizzing contest. But it’s not the destination that’s so delightful in this movie as it is the little detours along the way. The cartoon’s first minute or so, which introduces us to the nasty animals that Sindbad has turned into pets, immediately launches into a fairy-tale otherworld, as does the cave through which Popeye saunters to find Olive (an eye-popping 3D landscape courtesy of Max and Dave Fleischer, the producing/directing team behind the groundbreaking early Popeye cartoons).

And as comic “punctuation,” there’s the lovely running gag of Wimpy holding a meat-grinder and following a wayward duck around the island in the hope of gruesomely scoring his next meal. 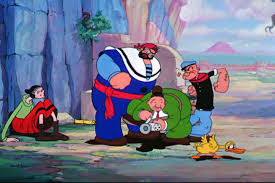 The cartoon isn’t as all-out funny as most Popeye entries, but the exotic setting and the eye-bathing colors more than make up for that. Watching this cartoon, you’ll be too busy keeping from swooning with child-like glee to laugh anyway.

Popeye the Sailor Meets Sindbad the Sailor is a delightful and groundbreaking precursor to the fantasy world of Walt Disney’s Snow White (released one year later). Nearly 70 years after its making, it was chosen for preservation in 2004 by the National Film Registry — whose membership is obviously made up of a number of kids at heart. 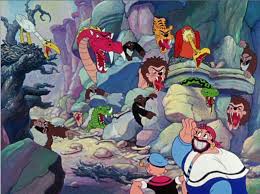 Once you start a blog about your favorite subject, you’ll find you are drawn to blogathons like a gambler to dice games! Here’s a link to the latest blogathon in which I plan to participate:  http://moviessilently.com/2014/09/12/announcement-the-fairy-tale-blogathon/