Six years ago today, to the everlasting reluctance of my wife, we adopted two rescue dogs, Lexi and Opie. At the time, this was done mostly to placate our son and daughter (who were, respectively, 16 and 19 years old).

We’d had a dog up to that point, a German Shepherd mix named Jag, but he had died the previous month. My son took it the hardest, mainly because he had watched Jag deteriorate before his eyes. We knew in Jag’s last two weeks of life that he wasn’t doing well, and my son went out of his way to treat Jag tenderly. One day, my son was getting ready to take the dog for a walk when Jag collapsed in the driveway.

My son and daughter rushed him to the vet’s office, which happened to be across the street from where my wife worked, so she came over to console the kids. When my son found out that Jag was dead, my wife said he let out a howl like she’d never heard before.

For two weeks, our house was pet-less and quiet, which was just how my wife wanted it. But the kids finally cajoled her into getting another dog, so we went to the local animal shelter.

We took a tour of the place, and as it happened, two dogs named Lexi and Opie were penned in the same cage. The shelter supervisor — who, we now believe, must have seen us coming a mile away — told us these two dogs always stayed together, and they had already been returned to the shelter twice after their owners tired of having to deal with them. The supervisor brought the dogs out, and next thing you know, two extra “people” were riding home in the car with us.

Neither of these dogs believed that they now had a permanent home. Opie curled up in a corner of our dining room and wouldn’t socialize with anyone the entire day. At one point, Lexi got out in our yard in the middle of a pouring rain, and it took me and my son to drag her out from behind some trees where she had ensconced herself.

Initially, the dogs were my daughter’s project, and she wanted to handle their discipline and training. After a couple of years of discovering that the dogs had no discipline and were immune to training, my daughter threw up her hands and let me and my son handle them.

Six years later, they still have pretty much the same quirks that they had on their first day with us. They follow me everywhere, and if I dare to close the door of the master bedroom behind me, Opie will stand outside of it and whine incessantly in the fervent belief that I am never coming back out. If I dare to show Opie the slightest affection (e.g., stroking or petting him), Lexi will jump in and demand favored-nations, because heaven forbid that she doesn’t get equal attention.

My wife, never a pet lover, would still happily euthanize Lexi and Opie. I’m more sanguine about them. Yes, they’re often very annoying. But so are my kids and my wife sometimes, and so am I. So murder is just not the answer in any instance.

Many people have misconceptions about owning a dog. For one thing, Lexi and Opie are both black dogs, which I am told are the least popular kind — I guess because they’re not photogenic enough. But if that’s the only reason you’re getting a dog, your mindset is way off anyway. They’re not beautiful and not terribly well-adjusted, which is why, I’m sure, that I relate so well to them.

Bottom line, I’m glad we saved them from an undeserved fate. I’d like to join the chorus of dog-lovers who say: If you want to purchase a pet, don’t buy from a puppy mill. There are plenty of pets who are ready to declare themselves rescue dogs and show you their gratitude for the rest of their lives. 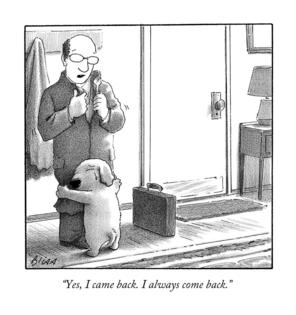