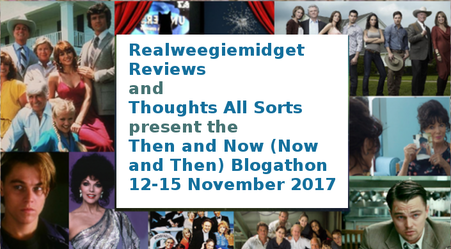 The following is my second of two entries in the Then and Now (Now and Then) Blogathon, being co-hosted by the blogs Realweegiemidget Reviews and Thoughts All Sorts from Nov. 12-15, 2017. You can click here for more details, but the main rules are that a participating blogger must choose:

Essentially, I have chosen both 1 and 2, as I am reviewing two feature films directed by and starring Charlie Chaplin; my entry for #1 can be found here. (I must confess that in the case of # 2, Chaplin appeared only in a seconds-long cameo. Otherwise, the criteria fit both entries.) The two entries come from wildly varied points in Chaplin’s film career — the first, when he was at the height of his creative and producing powers; the second; his movie swan song, long after much of those powers had been hindered by age and circumstances.

You probably have to be a die-hard Chaplin buff to appreciate anything in A Countess from Hong Kong…so let’s get all of the negativity out of the way first.

The making of the movie has been thoroughly documented as clashes of personalities: Marlon Brando and Sophia Loren, Charlie Chaplin and his son Sydney, and most notably, Chaplin and Brando. The movie received much worldwide publicity, but its unashamed old-fashioned-ness was bound to doom it in a year that saw cinematic breakthroughs such as The Graduate and Bonnie and Clyde.

And, truth be told, much of the movie’s poor reputation did not go unearned. The story, which Chaplin had initially conceived three decades earlier as a vehicle for Paulette Goddard, concerns women of former royalty whose circumstances had reduced them to being dance-hall women or prostitutes (though the movie only lightly hints at the latter).

Sophia Loren plays Natascha, a former White Russian countess reduced to such penury. Thanks to a rich benefactor, Natascha enjoys a single evening of wining and dining with Ogden Mears (Marlon Brando), an up-and-coming American diplomat. The following morning, after his ship has left Hong Kong, Ogden discovers Natascha hiding in the closet of his stateroom. Natascha has decided to become a stowaway to the United States and has made Ogden a most unwilling accomplice to her plan.

The majority of Chaplin’s filmography speaks for itself. But probably from Limelight on, you have to allow for some definite valleys in Chaplin’s movies before you ever reach the peaks. In Countess, that benefit-of-the-doubt accounts for its first hour.

Chaplin finds his farcical door-slamming routine, where Natascha must go into hiding whenever a stranger knocks on Ogden’s door, far funnier than we the audience do. Chaplin ladles on his score very thickly, as though he thinks the music is emoting better than his actors are – and he might be right. Loren seems game for anything, but Brando comes across as sullen, at least for the movie’s first half or so. And when the duo embrace passionately right at the movie’s one-hour mark, we really have to tell ourselves they’re in love, because they themselves haven’t given us much of a sign.

With all of that said, if you can hang on that long through the movie, it finally picks up steam in the last 45 minutes. After the movie beats us to death with the fact that Natascha has no papers or passport, Ogden and his associate Harvey (Chaplin’s son Sydney, in the movie’s liveliest performance) decide to “marry off” Natascha to Ogden’s valet Hudson (Patrick Cargill) to make Natascha an official American citizen. The movie finally grabs hold in the scene where Ogden first relays the plan to Hudson and explains it to him as though it was just another task for Hudson to perform in the course of his workday. Cargill’s understated reactions, here and for the rest of the movie, are priceless.

Once the movie finally finds its footing, it delivers all sorts of comic wonders: a terrific bit where Sydney, in deadpan imitation of his father, steals a man’s martini out from under him; Hudson’s bedtime routine, acted out in front of a double-taking Natascha; and best of all, a grand five minutes from Margaret Rutherford as a dotty but assertive old lady. (Monty Python cultists will enjoy seeing Python sidekick Carol Cleveland in an early role as Rutherford’s nurse.)

Chaplin’s final four features suffer for spotty pacing and scenes that ought to have been severely edited or removed outright. A Countess from Hong Kong is easily the worst offender, and it is probably this debit that has caused so many moviegoers to give up on this film. But it would be sad to think that Chaplin’s final film was too repugnant to endure, and while it starts out as such a test, it eventually finishes Chaplin’s movie career on a poignant note.

The following is my entry in the Then and Now (Now and Then) Blogathon, being co-hosted by the blogs Realweegiemidget Reviews and Thoughts All Sorts from Nov. 12-15, 2017. You can click here for more details, but the main rules are that a participating blogger must choose:

Essentially, I have chosen both 1 and 2, as I am reviewing two feature films directed by and starring Charlie Chaplin; my entry for # 2 can be found here. (I must confess that in the case of # 2, Chaplin appeared only in a seconds-long cameo. Otherwise, the criteria fit both entries.) The two entries come from wildly varied points in Chaplin’s film career — the first, when he was at the height of his creative and producing powers; the second; his movie swan song, long after much of those powers had been hindered by age and circumstances. 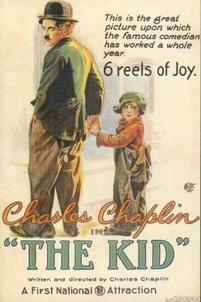 Nowadays, it’s nothing for a laugh-along sitcom to trumpet a “Very Special Episode” in which things are suddenly going to get semi-serious for a half-hour. But before Charlie Chaplin made The Kid, he was heralded by naysayers who knew perfectly well you couldn’t mix comedy and drama in the same movie. Nearly a century later, the original template still holds up magnificently.

This “comedy with a smile and, perhaps, a tear” begins with an unwed mother (Edna Purviance) “whose only sin was motherhood.” (Chaplin’s intertitles here are unusually editorializing – more on that in a moment.) Guiltily, she abandons her newborn baby in the backseat of a limousine that is soon stolen. When the car’s hijackers discover the baby in the back, they ditch the baby in an alley (mercifully so – one of the hijackers is ready and willing to shoot the child).

Enter the Tramp on his morning stroll. He happens upon the baby, and as soon as he tries to abandon the infant, all manner of circumstances cause him to be stuck with the child as though he was flypaper. And yet, for a man who fancies himself a loner, once the Tramp accepts the inevitable, he’s surprisingly adaptable to this new addition to his life.

Five years later, and the babe (Jackie Coogan) has grown into the spitting image of his foster father. The duo run a “business” of sorts, which I won’t detail here because it would be a “spoiler” and because it’s so beautifully detailed within the movie.

Later, Jackie has another great scene where he and the Tramp must deal with a neighborhood bully and his older brother. The conflict leaves Jackie ill, and when a doctor visits Jackie in his rundown home, he decides the law must intervene with (as a title tells us) “the proper care” – heartless officials who want to take Jackie away to an orphanage.

Of the scene where Jackie is nearly separated from the Tramp, Coogan said years later, “If you are going to portray yourself as being hysterical, you better get yourself hysterical or, brother, it’s as phony as a three-dollar bill.” Unlike so many stagey child actors before and since, phoniness in the one emotion that never occurs in Coogan’s performance. Whatever the scene calls for, he’s there. And this particular, openly cathartic scene proves that Chaplin knew the bedrock rule of parenthood: You don’t screw around with someone’s kid.

If the movie has any weak link, it’s probably its finale. Finally separated from the kid when a flophouse manager finds there’s been a reward offered for his return, the Tramp searches the city for the kid all night, returning forlornly to his own doorstep and falling asleep. There follows a cute but superfluous dream sequence in which the Tramp and Jackie are reunited in Heaven but still must deal with day-to-day hassles. The sequence has a few laughs, but like the “It was only a dream” endings done to death by Chaplin and his peers, it’s rather turned into a cliché from overuse.

(There’s also an interesting moment where a devil appears over the shoulder of a young female angel as she stares at the Tramp and tells her to “Vamp him.” Years later, when her name was changed to Lita Grey and she became the second Mrs. Charles Chaplin, she seemed to have done just that.)

And finally, the happy ending. A policeman rounds up the Tramp and takes him to the mansion of the kid’s mother. She is now a world-famous star and has been reunited with her child, and she happily welcomes the Tramp into her home as the film fades out. It’s a nice thought, except where would it go from there? The woman would no doubt be grateful for all that the Tramp has done, but where/how would he fit into her world? And being the Tramp, who never wants to fit in anywhere, how long before he would get restless and want to abandon the whole idyll? The later ambiguity of City Lights is far more satisfying precisely because it doesn’t strain to put a final exclamation point on the whole matter.

That said, The Kid is still a marvelous tearjerker in the best sense. Perhaps because the story involves not just the Tramp, whom we feel can fend on his own well enough, but an innocent child, the lower-class world inhabited by the Tramp seems even more bare-boned than usual. (In the shot where the flophouse manager is reading the newspaper ad for the kid’s reward, we even see a fly crawling across the newspaper. Eeew!) Maybe that’s why Chaplin went for the quick wrap-up with its sanitary setting.